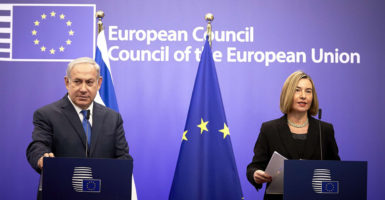 Israeli Prime Minister Benjamin Netanyahu and the European Union's foreign policy chief, Federica Mogherini, brief reporters Monday in Brussels. The EU so far has refused to follow the lead of the U.S. in recognizing Jerusalem as the capital of Israel. (Photo: Chine Nouvelle/Sipa/Newscom)

Many U.S. allies roundly criticized the Trump administration’s move to recognize Jerusalem as the capital of Israel, but America doesn’t stand alone on the white-hot issue.

“President Trump has planted the seeds of this long overdue shift,” @PastorJohnHagee says.

In fact, the Czech Republic appeared to jump at the opportunity to say that it already considered Jerusalem, not Tel Aviv, to be the capital of the Jewish state.

The Czech Republic currently, before the peace between Israel and Palestine is signed, recognizes Jerusalem to be in fact the capital of Israel in the borders of the demarcation line from 1967. … The ministry can start considering moving of the Czech embassy from Tel Aviv to Jerusalem only based on results of negotiations with key partners in the region and in the world.

For its part, the United States is delaying moving its embassy from Tel Aviv to Jerusalem, pending a State Department review.

On Tuesday, the European Union denied a request from Israeli Prime Minister Benjamin Netanyahu to recognize Jerusalem as the U.S. government has.

Hungary blocked an EU resolution condemning the U.S. decision, but hasn’t taken action to recognize Jerusalem on its own.

Much work remains, but the U.S. move gives hope to Israel supporters such as the Rev. John Hagee, senior pastor of a large evangelical church in Texas and founder of the group Christians United for Israel.

“In addition, due to the Israelis’ incredible emphasis on humanitarian assistance,” he said, “the Jewish state has deep relations with many African countries and other nations in the developing world, and that is perhaps the reason we’ve seen leaders from Tanzania and Ghana indicate a willingness to follow President Trump’s lead.”

Hagee, president and CEO of John Hagee Ministries, added that Trump simply “confirmed a 3,000-year-old historical fact,” but acknowledged that the rest of the world would be a challenge.

“This said, the unfortunate tradition of not recognizing Jerusalem as Israel’s capital has 70 years behind it—it will take some time to reverse,” Hagee said. “But President Trump has planted the seeds of this long overdue shift, and with persistence, it will eventually be accepted more broadly. America leads once again.”

Aaron Mike Oquaye, speaker of Ghana’s parliament, told Israel’s i24News that “whatever Israel wants, we in Ghana will go by that, because that is essentially an internal decision.”

Job Ndugai, speaker of the National Assembly of Tanzania, told the outlet:

The United States filled a vacuum of moral leadership, said Sarah Stern, president of the Endowment for Middle East Truth, a pro-Israel think tank. She is “cautiously optimistic” that more countries will follow, Stern said.

“I’m cautious because the virus of anti-Semitism is taking different forms. Today, it has taken the form collectively against Israel,” Stern told The Daily Signal in a phone interview. “Throughout the world, we are seeing horrible demonstrations.”

She noted some demonstrations, including in London and New York, contained calls for violence against Israel.

Under the Israeli-Palestinian peace accord of 1993, the status of Jerusalem was to be determined through negotiations. The Palestinian Authority has claimed East Jerusalem as the capital of a future Muslim state.

Despite that, Presidents Bill Clinton, George W. Bush, and Barack Obama all vowed to recognize Jerusalem as the capital of Israel at some point.

“Iran, Hezbollah, and Hamas and other Islamic extremist organizations will continue to try to whip up people as long as they can, but I think it will eventually die down,” Phillips told The Daily Signal.

“Saudi Arabia, the [United Arab Emirates], and Bahrain have moved closer to Israel in a number of areas, and have covertly cooperated,” Phillips said. “I don’t think we’ll see the covert cooperation end. This may delay public reconciliation by moderate Arab states with Israel.”