As Immigration Arrests Increase Under Trump, So Do Border Crossings by Unaccompanied Minors 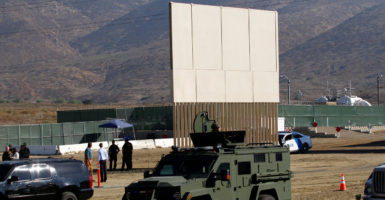 The Trump administration counts the overall successes in curbing illegal immigration as “another success,” but since May there has been an increase of families and unaccompanied children illegally coming across the border.

“These are 60,000 American patriots that choose this profession to defend this country,” Thomas Homan says.

Some experts attribute this to the talk of amnesty for so-called “Dreamers,” or illegal immigrants brought into the country as minors.

The Department of Homeland Security released its final numbers for fiscal year 2017 that spanned the final months of Barack Obama’s presidency and the first nine months of Donald Trump’s presidency, October 1, 2016 through Sept. 30, 2017. The federal government arrested almost 40 percent more illegal immigrants inside the country in the past fiscal year.

“I think it shows, probably, the effectiveness of the Trump presidency and another success story as we wrap up the year and certainly something that could be looked at,” White House press secretary Sarah Huckabee Sanders said. “But I think the need for the border wall and border security, as well as responsible immigration reform, still stands. And we still need to look at all the ways that we can protect our national security, and we still feel strongly that that’s one of them.”

She found overall trends to be positive, but stressed it will take time to address illegal crossings by families and unaccompanied children.

The more than 150,000 combined arrests for families and unaccompanied minors in fiscal year 2017 is significant, Vaughan told The Daily Signal.

“Court rulings greatly constrain what ICE can do,” Vaughan said.

Vaughan said children can’t be detained, based on court rulings, and in most cases, neither can parents.

“At the end of the day we’re still operating a catch-and-release program,” she said. “If you make it into the U.S., you can stay for an indefinite period. If you don’t show up for your hearing, nothing will happen.”

She further said this problem ties into the debate over a fix on the Deferred Action for Childhood Arrivals program, which shields from deportation about 800,000 illegal immigrants brought into the country as minors. That’s because talk of an amnesty will encourage more young people to try to illegally cross, Vaughan said.

“If they don’t know all the details, that’s probably even more of an incentive,” Vaughan said.

The Trump administration has done a great job in letting ICE agents do their job and increasing interior enforcement, said David Inserra, homeland security analyst for The Heritage Foundation.

However, the CBP numbers showing the increase of families and unaccompanied minors crossing the border can be attributed in part to the fact that by May, illegal immigrants didn’t see the crackdown some thought would be immediate, Inserra said.

“We are seeing a better message sent than with the last administration, but because we haven’t seen enough change, we are starting to see the numbers creep up,” Inserra told The Daily Signal. “After a few months, illegal immigrants began to believe it’s not going to be as we thought.”

Talk of DACA is also a problem, he added.

“They are hearing and being told by less scrupulous people that the U.S. is going to have an amnesty, and Donald Trump himself is OK with it,” Inserra said. “An amnesty never sends the right message.”

Of the arrests, 92 percent, or 101,722, were of illegal immigrants who had criminal convictions or illegally re-entered the country.

“I’ve read a lot of stories and comments over the past several months falsely accusing ICE of conducting indiscriminate raids and sweeps, arresting people at churches, arresting people at hospitals. I repeatedly said that is false,” ICE acting Director Thomas Homan said at a press conference Tuesday. “We conduct targeted enforcement operations. Every person we arrest, we know exactly who we are going to arrest and where we’re going to arrest them, based on a lot of investigative intelligence data.”

“We get allegations every day against the fine men and women of ICE. It’s really sad the vilification of these men and women, men and women of the Border Patrol,” Homan said. “These are people who chose a profession; no one is getting rich in this job. But they strap a gun to their hip every day to protect their communities, leave the safety and security of their homes and their families to defend this nation. The last thing they need is vilification from these activist groups. These are 60,000 American patriots that choose this profession to defend this country.”

The CBP apprehended 310,531, a 23.7 percent decline from fiscal year 2016. With regard to Trump’s time in office, the CBP shows that border crossing along the southwest border declined from Jan. 21—a day after Trump’s inauguration—through April.

“We remain concerned about the steady flow of unaccompanied children and family units from Central America,” CBP acting Deputy Commissioner Ronald Vitiello said in the Tuesday press conference. “This trend is enabled by legal and policy loopholes, which are exploited by transnational criminal organizations engaged in human smuggling and trafficking.”

Vitiello addressed the need for greater enforcement, including a border wall.

“In response to the president’s executive order on border security and immigration enforcement improvement, subsequent guidance form the Department of Homeland Security, CBP selected six contractors to build eight wall prototypes on the border near San Diego,” he said. “Construction began in September and was concluded in October. We have begun testing in the evaluation phase. We know however that the wall is part of a larger enforcement security system, so we are committed to using new technologies to augment our resources and employ sensors, lighting, radar and fixed and mobile towers.”

Francis Cissna, director of U.S. Citizenship and Immigration Services, touted the need for implementing Trump’s immigration priorities going into 2018, which he said would protect the U.S. economy and national security.

“Among these priorities are ending extended family migration, ending asylum abuse, and shifting a merit-based immigration system,” Cissna said. “Preliminary data for fiscal year 2017 shows that 2 out of 3 of our 1 million-plus immigrants were admitted in family-based categories. Only 66,000 out of that 1 million lawful permanent residents were admitted based on their skills.”