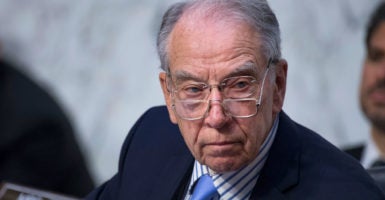 When Democrats blew up the 225-year-old judicial confirmation rules in 2013, Grassley said they’d regret it. Now, four years later, the left is finding out just how right he was.

Sure, clearing the way for a simple majority to rubber-stamp the president’s judges seemed like a good idea at the time. But now that the shoe is on the other foot, liberals suddenly find themselves on the wrong side of the same process they manipulated.

Now, left without the only weapon that could stop a confirmation—the filibuster—Democrats are grasping for anything to put the brakes on this high-speed train of nominees. What they’ve settled on is a century-old tradition born out of common courtesy: the blue slip.

Dating back to 1917, if a president nominated someone to the Senate, committee chairmen would send an evaluation form of sorts to the person’s hometown senators. They could return it, signaling their willingness to hold a hearing, or withhold it—usually grinding the progress on that nomination to a halt.

There’s just one problem: The practice has never been an official Senate rule. Instead, it’s more of a gentlemanly agreement to give deference to the two leaders who may know the person in question best.

So while senators have taken to withholding their blue slips in protest, there’s nothing stopping Grassley from moving forward without them.

And on Thursday, he promised to do just that. The longtime conservative announced to his colleagues that his patience has officially run out.

“As I’ve said all along, I won’t allow the blue slip process to be abused. I won’t allow senators to prevent a committee hearing for political or ideological reasons. … The Democrats seriously regret that they abolished the filibuster, as I warned them they would. But they can’t expect to use the blue slip courtesy in its place. That’s not what the blue slip is meant for.”

The tradition was never created, Grassley went on, to be a home-state veto. And after Thanksgiving, he refuses to treat it like one.

When the Senate flies back from turkey day, the Iowa Republican has already announced his plan to move on 8th and 5th U.S. Circuit Court of Appeals nominees David Stras and Kyle Duncan.

“I’ll add that I’m less likely to proceed on a district court nominee who does not have two positive blue slips from home state. But circuit courts cover multiple states. There’s less reason to defer to the views of a single state’s senator for such nominees.”

For Trump, Grassley has been a perfect partner in accomplishing what most voters agreed was one of their biggest priorities: reshaping the federal judiciary.

“When the history books are written about the Trump administration, the legacy will be the men and women confirmed to the trial bench,” Sen. Ted Cruz, R-Texas, explained. And when that happens, some of the credit will almost certainly belong to leaders like Chuck Grassley.