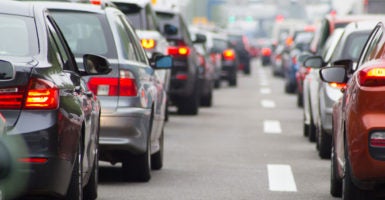 President Barack Obama’s Environmental Protection Agency paid $1.5 million for employee parking spaces, many of which went to the highly-paid upper management or were unused, a government watchdog reported Wednesday.

The EPA spent $840,000 subsidizing parking spaces and another $690,000 on empty spaces, the agency’s inspector general found. Meanwhile, federal law has sought to discourage employees from driving to work without carpooling over the last 30 years and agencies have promoted using public transportation and telework, which improves air quality.

One executive order “touts federal air quality goals” and “the EPA was using valuable resources to subsidize employee parking when the funds could be put to better use in mission-critical programs,” the report said.

Inspector general spokeswoman Tia Elbaum added in a podcast: “Obviously, the EPA has an expert interest in reducing greenhouse gas emissions. That comes into play here.”

The General Services Administration “cited greenhouse gas emissions as a justification for eliminating its own free parking program for employees back in 2013,” Cathy Allen, an auditor with the inspector general, said in the podcast. “GSA wanted to encourage the use of public transportation and mobile work arrangements in order to reduce traffic congestion and its own carbon footprint.”

Only the Washington, D.C., and Atlanta EPA offices subsidize parking and only for some employees, according to Allen. Washington employees were given $129.55 monthly subsidies if they had a disability, if they worked unusual hours, or if they carpooled with at least three people.

More than half of the subsidized parking spaces were given to upper managers, “who are already among the EPA’s highest-paid employees,” Allen said.

Additionally, one-fifth of the carpools counted children to meet the three-person requirement, according to the inspector general. In some cases, an EPA employee may have driven his two children to receive the subsidy.

The EPA, under current Administrator Scott Pruitt, agreed to stop subsidizing parking for headquarters employees and instead offered parking spaces for the full $293.45 monthly price. Atlanta already discontinued providing parking subsidies for carpools, but kept one space for a disabled employee.