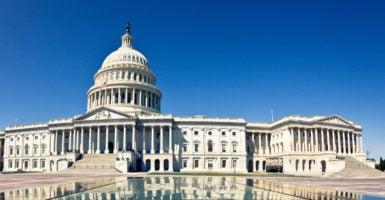 The Senate voted to confirm Amy Barrett from Indiana to the 7th U.S. Circuit Court of Appeals, Joan Larsen of Michigan to the 6th Circuit, Allison Eid of Colorado to the 10th Circuit, Stephanos Bibas of Pennsylvania to the 3rd Circuit, and Trevor McFadden to the U.S. District Court in Washington, D.C.

The appeals court judges were confirmed mostly along party lines, with a handful of Democrats crossing over to confirm these highly qualified conservatives. McFadden was confirmed 84-10, with six senators not voting.

And there are still several weeks before the Senate recesses for Christmas, so more of Trump’s superb nominees might be confirmed before the end of the year.

Trump should be congratulated for this achievement. In this day and age, it’s no easy feat to guide judicial nominations through the cogs of the Senate.

While there’s still plenty of work to do, Senate Majority Leader Mitch McConnell, R-Ky., and Senate Judiciary Committee Chairman Chuck Grassley, R-Iowa, should also be congratulated for their leadership.

In the face of resistance from the left, we now have several new constitutionalist judges who, with any luck, will serve with distinction for decades to come.

Speaking of resistance, it’s worth noting that from 1949—when the cloture rule was extended to cover nominations—through nine presidential administrations, there were only seven cloture votes on all nominations in a president’s first year.

But that changed starting this year. There have been 51 cloture votes on Trump’s nominees in his first 10 months in office. Democrats have forced cloture votes on 12 of 13 judicial nominees and dozens of executive branch nominees.

Invoking cloture used to be a meaningful step, because it took 60 votes to end debate so that a confirmation vote could occur. In essence, it was a way to filibuster a nominee.

But Senate Democrats did away with the filibuster for lower court judges and executive branch nominees in November 2013, and Republicans put the final nail in its coffin this past spring with Neil Gorsuch’s confirmation to the Supreme Court. Now, demanding a cloture vote and up to 30 hours of debate on each nominee is simply a tactic to delay and obstruct.

With any luck, McConnell will be able to keep these nominations rolling. There are still 46 nominees pending and more than 160 current and future known vacancies on the federal courts.

Many of Trump’s outstanding nominees face obstacles. David Stras has waited for a hearing since May and Steve Grasz was rated “not qualified” by the American Bar Association—likely because of his personal views on abortion.

Michael Brennan and Ryan Bounds face obstruction from some of their home state senators. Kyle Duncan, Jeff Mateer, and Matthew Kacsmaryk have been attacked by the left for advancing religious liberty and challenging the LGBTQ agenda.

Greg Katsas, who currently serves as deputy White House counsel, was harangued during his confirmation hearing for not agreeing to recuse himself from a whole host of matters that may come before him if confirmed to the U.S. Court of Appeals for the D.C. Circuit.

The confirmations this week are a cause for celebration and a positive development for the rule of law. Trump is well on his way to securing a generation of judges on par with those of the Reagan Revolution.