What Trump Wants US to Do to Prevent Another Terror Attack 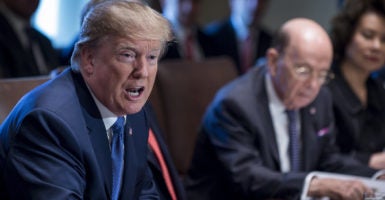 President Donald Trump speaks about the terrorist attack the day ahead of his Cabinet meeting Wednesday at the White House. (Photo: Pete Marovich /UPI/Newscom)

President Donald Trump supported eliminating the diversity visa program before, but is emphasizing the need to do so after the terrorist attack in New York Tuesday.

“I am today starting the process of terminating the diversity lottery program,” Trump said ahead of a Cabinet meeting Wednesday. “I’m going to ask Congress to immediately initiate or get rid of this program.”

The Diversity Visa Lottery Program, which has been around for two decades, awards about 50,000 visas to individuals each year, targeting countries that rarely send immigrants to the United States.

The attacker on Tuesday was Uzbekistan national Sayfullo Habibullaevic Saipov, 29, who reportedly came to the United States in 2010 through a State Department program known as the Diversity Visa Lottery. He rented a truck from Home Depot, and drove into a crowd of bicyclists and pedestrians in Manhattan, killing eight and injuring at least 11 others. He got out of the vehicle with two fake guns and shouted “Allahu akbar.” Authorities suspect Saipov was inspired by the Islamic State.

The New York attack marks the 100th known Islamist-related terrorist plot since 9/11, based on The Heritage Foundation’s terrorism database, said James Carafano, vice president for national security and foreign affairs for the foundation.

“He came in through the diversity program, as you know, and we’re going to stop it,” Trump said of Saipov. “Terrorists are constantly seeking to strike our nation and it will require the unflinching devotion to our law enforcement, homeland security, and intelligence professionals to keep America safe. … We have to get much tougher and we have to get much smarter. And we have to get much less politically correct.”

The Heritage Foundation opposes the lottery program, but not particularly for terrorism reasons, Carafano said.

“No visa program per se represents a particular terrorist threat if proper vetting and security practices are in place,” Carfano told The Daily Signal. He added:

Proper measures are determined by competent risk assessments. Terrorists have tried every manner to come to the U.S. that can be imagined. If we banned a method of travel because a terrorist tried to use it, we would have to ban all travel to the U.S. The president was right to criticize the lottery visa—it’s not a useful or efficient or appropriate tool for determining who should immigrate here. We need a merit-based system.

Ending the diversity visa program should fit in with a larger national security agenda, said Fred Fleitz, vice president for policy and programs at the Center for Security Policy, a national security think tank.

During the press briefing, White House press secretary Sarah Huckabee Sanders noted that extreme vetting measures remain a high priority. However, she said the administration has made a decision on whether to add Uzbekistan to the list.

Currently, the list is made up of North Korea, Venezuela, Chad, Iran, Libya, Somalia, Syria, and Yemen. The Supreme Court declined to hear challenges last month to the Trump’s administration’s vetting policy because the matter had expired.

“For years, we’ve seen ISIS moving away from spectacular attacks to using knives and vehicles,” Fleitz said. “It’s a sign that ISIS is far different but still operating as a terrorist group.”

This also demonstrates how weak the Islamic State has become, The Heritage Foundation’s Carafano said.

“They have been humiliated. They don’t have the physical caliphate. They have to rely on a virtual caliphate,” Carafano told The Daily Signal.

He added that the Trump administration is always right to intensify vetting. But broadly speaking, it’s difficult to say whether a policy prescription would have prevented the attack, Carafano said.

“The overwhelming number of those have been thwarted through intelligence and community policing. So what we are doing is effective,” Carafano said. “We should always go back and review to see if there is something we’ve missed.”

It is too early be sure of what policies might have prevented this attack or others like it, said Bill Roggio, a senior fellow at the Foundation for Defense of Democracies.

“These attacks lack sophistication and are not on the scale of a 9/11,” Roggio told The Daily Signal. “But this is something that can happen in everyday life. This not only raises fear for the average American, but it’s a concern for law enforcement. What are you going to do, ban rental trucks?”