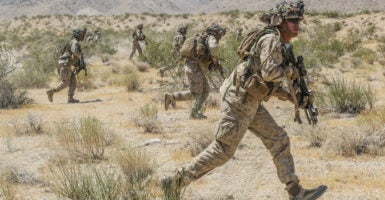 Liberals didn’t mind when former President Barack Obama forced his radical social policies on our military, but they certainly don’t want President Donald Trump rescinding them. So where do they turn? Unelected judges.

That’s what happened Monday, thanks to U.S. District Judge Colleen Kollar-Kotelly, who made the sweeping decision to keep the White House’s military transgender order from taking effect. Without the benefit of the administration’s data, military advisers, or intelligence reports, Kollar-Kotelly put herself in the position of setting a national security policy with very real consequences for our country.

As a result of her temporary injunction, the entire military will “revert to the status quo,” a dangerous environment where people like Chelsea (Bradley) Manning can serve openly, women can be forced to shower with biological men, and “pregnant males” can apply for maternity leave.

Of course, the judge’s activism was celebrated by liberals, who don’t see the obvious problems of injecting Obama’s social engineering back into a military that the world was finally starting to take seriously again.

For the Trump administration, which was already drafting regulations to turn the president’s July tweets into military policy, Kollar-Kotelly’s 76 pages of politically correct talking points are a frustrating bump in the road to restoring readiness.

Her agenda is obvious from the opening line to the last, where she has the audacity to claim that “a bare invocation of ‘national defense’ simply cannot defeat every motion for preliminary injunction that touches on the military. On the record before the court, there is absolutely no support for the claim that the ongoing service of transgender people would have any negative effective on the military at all.”

There was certainly enough support among the Defense Department, top brass, and service members themselves—who know better than anyone what the effects would be and have been. But unfortunately, this is where judicial activism is leading us.

The courts have moved beyond legislating on issues like abortion and same-sex marriage to openly usurping the constitutional authority of the executive branch. The president’s primary task is protecting Americans. Yet now we’ve seen the courts do everything from relax the president’s immigration policy to telling the commander in chief how to run the military. And without the barest form of accountability to the same people who elected Trump.

If Kollar-Kotelly wants to lead the military, she should face the people and run for president. Until then, her court should leave the policymaking to the man best informed and empowered for the job.