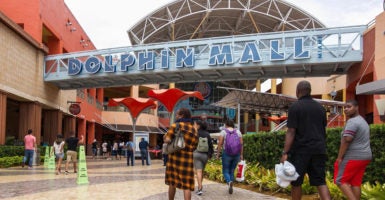 The Department of Justice charged Vicente Adolfo Solano last week with attempting to use an explosive device at a Miami mall.

Solano had pledged his allegiance to the Islamic State, also known as ISIS. This case represents the 99th Islamist terrorism plot or attack against the U.S. homeland since 9/11.

A confidential informant with the Drug Enforcement Administration notified authorities that Solano had been growing increasingly upset with the U.S. and desired to plan a terrorist attack against a Miami mall on Black Friday.

The informant asked for proof that Solano was serious before proceeding further, and Solano sent several videos pledging his allegiance to ISIS, noting past terrorist attacks, such as the Boston Marathon bombing in April 2013, and calling President Donald Trump a “racist” and a “white supremacist.”

Solano would go on to meet with the informant and discussed bomb-making and the need for secure communication.

The information would introduce Solano to undercover FBI agents who posed as conspirators who would offer to help carry out the attack. They visited the mall in question and walked through the plan of attack.

Solano acquired screws and other materials that he thought would go toward building the device. On Oct. 20, Solano would meet with the undercover agents to put together the bomb and practice arming it, though it was actually inert.

Solano then took the device to the Dolphin Mall and activated the timer. He was arrested as he approached the mall with the activated, though inert, bomb.

Solano was in the U.S. on temporary humanitarian status since 2002, having legally entered the U.S. from Honduras.

This plot is still considered a homegrown plot, as Solano was radicalized in the U.S. since his entry and marks the 86th plot that was completely or substantially homegrown. It is also the 25th plot or attack aimed at public gatherings and public places, such as restaurants, malls, or city squares.

The rise, and now what appears to be the fall in terrorist plots, are correlated with the rise and fall of ISIS, suggesting that what happens abroad does not remain abroad.

Terrorist pseudo-states or safe havens can allow terrorist organizations to thrive and attract additional followers. The U.S. must continue to deny terrorists such safe havens, not only to help friends and allies in the Middle East and South Asia, but also to keep the U.S. homeland safe.

Note: This article has been corrected to accurately reflect that Solano’s plot is the 86th terror plot on U.S. soil to have been completely or substantially homegrown.