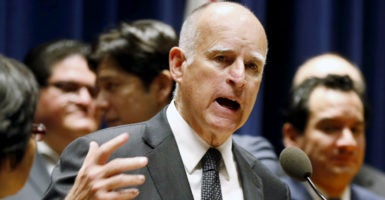 California Gov. Jerry Brown says he will sue the president for nixing the Clean Power Plan. He claims the tactic is akin to Republican efforts to hold up climate policies during the Obama-era. (Photo: Lucy Nicholson/REUTERS/Newscom)

California Gov. Jerry Brown plans to use what he calls a Republican tactic and sue the Trump administration over President Donald Trump’s climate change policies.

Brown, a virulent Trump opponent, told reporters Tuesday that he will sue the president for nixing the Clean Power Plan, an Obama-era regulation Republicans believe hurt the coal industry. He claims the tactic is akin to Republican efforts to hold up climate policies during the Obama-era.

“First of all, we can go to court and block his efforts and we are doing that. Just like the Republicans tried to block [President Barack] Obama’s efforts,” Brown said. Republican attorneys general sued to hold up the Clean Power Plan, but the lawsuit was suspended after Trump rolled back the plan earlier this year.

Democratic attorneys general are now where Republicans were during the Obama administration: working to derail their political opponent’s agenda.

New York Attorney General Eric Schneiderman, for instance, is preparing a lawsuit to protect Obama’s environmental policies. California Attorney General Xavier Becerra has also repeatedly sued the government over the environment, and told reporters earlier this year that he will do “everything in my power to defend the Clean Power Plan.”

Brown has made the rounds to generate support for a state coalition supporting the Paris climate deal, which obligated the U.S. to pledge to reduce the country’s greenhouse gas emissions nearly 30 percent by 2025. He browbeat his state’s legislature in April to push for extending the state’s already massive cap-and-trade program.

Brown also met with Chinese President Xi Jinping earlier this year to discuss aspects of the non-binding climate deal. They both hashed out ways to push their respective entities away from fossil fuel production and closer to renewable energy to meet Paris’ ambitious aims.

BBC reporters asked Brown Tuesday whether he believed that Trump thought climate change was “an illusion.”

“No, I don’t believe that,” he said. “But he, like politicians, work their constituency. And I think he sees this as a galvanizing rhetoric for his base.”