Tax Reform Is ‘Opportunity of a Lifetime’ That ‘Has to Be Seized,’ Ryan Says 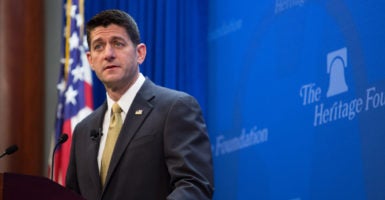 House Speaker Paul Ryan says the Republicans’ tax plan will introduce reforms that are 31 years in the making.

“Our plan will lower tax rates at every income level for families,” Ryan, R-Wis., said Thursday in a speech at The Heritage Foundation. “It will deliver the lowest tax rate in modern history for job creators of all sizes. We will end the death tax, repeal the alternative minimum tax, and eliminate the marriage penalty.”

He added: “That moment is here, and that moment is now, and like any opportunity of a lifetime, it has to be seized.”

The Republicans’ tax reform framework—released Sept. 27 by Ryan, Senate Majority Leader Mitch McConnell, and other GOP leaders—seeks to significantly simplify the tax code. It would be the first such major overhaul of the tax code since the Reagan administration in 1986.

Releasing the framework was part of Republicans’ strategy learned from their failure to repeal Obamacare, Ryan said.

“The reason we wanted to do it this way, release a framework, is a lesson we learned from health care,” he said, adding:

So, what we decided to do was to put more time and energy into the front end of the process, to get everyone on the same page, to agree on this framework, which … was written by the Senate Finance Committee and the House Ways and Means Committee with the Trump White House.

The GOP tax reform plan calls for roughly doubling taxpayers’ standard deduction, under which an individual’s first $12,000 of income would become tax-free, as would the first $24,000 for married couples. It would also condense the current seven tax brackets to three.

The framework would end personal exemptions for dependents, increase the child tax credit, and end the estate tax, which opponents refer to as the “death tax.”

“We will end the death tax, repeal the alternative minimum tax, and eliminate the marriage penalty,” Ryan said. “All of this will mean more jobs, fairer taxes, and bigger paychecks. For our economy, it will mean the real growth that has eluded us for too long will be restored.”

While tax reform would be a great boost to the economy, he said, it reaches beyond purely economic interests.

“It is also in our greater national interests,” the House speaker said. “And the reason is this: Embedded in our DNA is this beautiful notion, ‘The condition of your birth does not determine the outcome of your life.’ And, what affects it, what drives it, it’s your own striving, it’s your own sense of purpose.”

Ryan also stressed tax reform was crucial for not allowing liberals to control the country. “If we choose to do nothing, we allow people struggling to get by to become the permanent normal. We allow stagnation to become our way of life,” he warned. “And you know as well I do that if we fail to restore real growth and opportunity, that plays directly into the hands of the left. Stagnation is a breeding ground for a class-based society where elites in Washington seek to micromanage and predetermine the path of our lives.”

“They would rather equalize the outcomes and lull us into lives of dependency. We have seen this too many times before, and we cannot let it happen again,” he said. “Right now, we have the chance to get off this downward path.”

Where better to start than the same, tired old line of attack that this tax cut is ‘a tax cut for the rich at the expense of the middle class’?

… You know what the irony is of all this? A tax system that disproportionately benefits the wealthy instead of the middle class? That’s the one we’ve got right now.

It works best for those who know how to take advantage of all the breaks and deductions.

The last time Congress updated the tax code was in 1986, with President Ronald Reagan’s Tax Reform Act, and the speaker of the House said the new plan will not harm the middle class, as opponents claim.

“They will tell you that eliminating carveouts will actually hurt middle-class families, rather than special interests,” Ryan said, adding, “This one takes the cake. Most hardworking Americans never see a dime from these loopholes. Instead, these pet provisions just reward the few and keep rates artificially high for everybody else.”

The Wisconsin lawmaker said he is confident the push for tax reform will be successful.

“This is the kind of bold reform that will revive Main Streets across the country, something that we so desperately need,” Ryan said. “Working together, House, Senate, President [Donald] Trump, we will see this thing through.”

Adam Michel, a tax policy analyst at The Heritage Foundation, told The Daily Signal in an email that tax reform will benefit all Americans.

I agree with the speaker. Those who support higher wages, more jobs, and better opportunities for all Americans should also be in full support of the tax reform framework that was recently released.

Those who demagogue any tax reform effort as just ‘tax cuts for the rich’ are both defending the status quo economy and are doing a disservice to working Americans who stand to get a raise from tax reform.

After all, we know businesses are made up of people, and a vast majority of the cost of business taxes are passed on to workers.