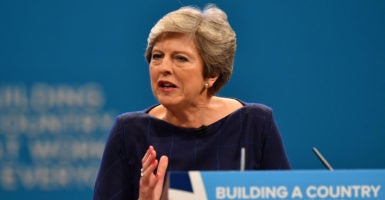 It had won an unexpected victory in the 2015 election. Then, in June 2016, Britain voted to leave the European Union—a result that delighted most voters on the right, and quite a few on the left too. And at the start of the summer, the Conservatives looked set for a smashing, historic victory in the elections of June 2017.

Well, that didn’t happen. The Conservatives won a narrow victory, but the margin was so close, and the collapse against expectations so catastrophic, that the victory felt—feels—like a loss.

This week, the party met in Manchester, England, for the first time since that disappointment, in an annual conference that, for the most part, had the atmosphere of a morgue and the inspirational qualities of a wet rag.

Curiously, the facts on the ground don’t look bad. The British economy, defying predictions it would collapse as a result of Brexit, has strengthened. The Brexit process itself is moving messily forward. And though much is made of the revival of the Labour Party under hard-left leader Jeremy Corbyn, when the British people are polled on who they want as prime minister, Corbyn still ranks third, below “don’t know.”

A good deal of the Conservative problem stems from the fact that it ran a terrible campaign in the last election, deservedly did poorly, and is depressed as a result. There’s nothing like winning for improving morale—but feeling like a loser makes it hard to imagine being a winner.

Unfortunately, though, the Conservative problem runs deeper than that.

The simple fact is that it’s hard to figure why—with the vital exception of Brexit—this Conservative government is still in office.

It has not advanced any major conservative reforms, unlike its predecessor’s focus on welfare and education. It has nothing much to say about foreign policy, and, foolishly, is actually drawing closer to the European Union in defense policy even as Britain leaves the EU.

The Conservatives are not making notable progress addressing Britain’s fiscal problems, or ratcheting back its welfare state. They tried to win an election without a pledge to cut taxes. And their main promise this week was a widely mocked one to shovel even more money into a housing market that already has too many purchasers for too few houses.

The Conservatives are thoroughly in survival mode. But unfortunately, survival mode in politics is like the prevent defense in football: All it does is prevent you from winning.

In the circumstances, it’s close to inexplicable that Theresa May is still leading the Conservative Party as Britain’s prime minister—in more normal times, she’d have quit or been shoved out after the election.

Having spent the last three days in Manchester, I’ve met no one who supports her on principle, though quite a few support her on the grounds that she’s the only one who’s marginally acceptable to everyone.

The Conservative Party, in other words, is desperate to avoid a leadership contest, at least until Britain is out of the EU in 2019.

That’s why Foreign Secretary Boris Johnson—as I write this, he’s making a barnstorming speech that’s woken the attendees out of their torpor and drawn laughs even in the demanding audience of the press room—is so dangerous. He’s funny, he’s smart, he’s vigorously pro-Brexit, and he raises questions about May’s adequacy—or tolerability—that the party would rather ignore.

In wanting to dodge those questions, the Conservative Party is running sadly true to form. Except for Johnson’s popularity—and May’s bare tolerability—what stands out in Manchester is how bereft the party is of ideas, or even of leaders who are willing to push back for conservatism against the hard left.

The few who have the ability and desire to do so—above all, Jacob Rees-Mogg, member of Parliament, the darling of this year’s conference—are celebrated, but party delegates concede that rhetorical fight-backs can’t substitute for policy successes based on conservative principles.

So what is the position of the Conservative Party in Britain?

Not dead, definitely, and still at least as likely to win the next election as to lose it.

Today, it controls the executive. It commands a narrow majority in Parliament. It faces a reinvigorated progressive left, one that is popular among the young, which loves multicultural grievances, which wants to nationalize everything in sight, and which can’t say enough nice things about Venezuela’s starving socialist dictatorship.

But the party can’t balance the budget, cut taxes, or fix health care. It seems to like fighting among itself at least as much as it likes battling the left or governing. And a lot of its conservative activists distrust its establishment, which they view as do-nothings mostly interested in holding onto office.

Remind you of anyone in the United States?

Note: This article has been updated to accurately reflect the month of the Brexit referendum.