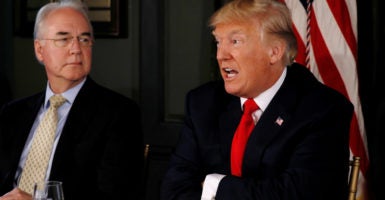 Price had been under fire for his use of private charter flights.

“Secretary of Health and Human Services Thomas Price offered his resignation earlier today and the president accepted,” Sanders said in a statement released just after 4:30 p.m.

“The president intends to designate Don J. Wright of Virginia to serve as acting secretary, effective at 11:59 p.m. on Sept. 29, 2017,” Sanders continued. “Mr. Wright currently serves as the deputy assistant secretary for Health and director of the Office of Disease Prevention and Health Promotion.”

Earlier Friday, Trump had said of Price, “He’s a very fine man,” but had added, “I certainly don’t like the optics. I’m not happy, I can tell you that. I’m not happy.”

He came under fire for many domestic private chartered flights, such as from Washington to nearby locations like Philadelphia and New Hampshire.

Some of Price’s controversial flights were used for travels to Africa to review progress on Ebola, and to participate in global health meetings in Europe.

In his resignation letter, Price wrote, “I have spent forty years both as a doctor and public servant putting people first. I regret that the recent events have created a distraction from these important objectives.”

Because of the controversy Price had said he would pay more than $51,887.31 back to the U.S. treasury, a portion of the total transportation cost, which would exceed $400,000 for the private charter domestic flights. However, Politico also reported that the administration approved another $500,000 in costs for traveling on military planes for health conferences in Africa, Asia and Europe.

During the period from Jan. 20 to Sept. 19, the Trump administration authorized 77 military flights, while the Obama administration allowed 94 flights during the same time in 2009, Fox News reported Friday.

Trump also noted this before boarding Marine One in the White House South Lawn.

“We put in an order that no more planes – if you look at past administrations, for instance, if you look at the Obama administration and take a look at the amount of time they spent in the air, they spent a lot of time in the air,” Trump said. “But I felt very badly because Secretary Price is a good man. But we are looking into it and we are looking into it very seriously.”

In his resignation letter, released by the White House, Price wrote:

It is an honor and privilege to serve you as the Secretary of Health and Human Services. Under your leadership, the Department is working aggressively to improve the health andwell-being of all Americans. This includes working to reform a broken health care system, empower patients, reduce regulatory burdens, ensure global health security, and tackle clinical priorities such as the opioids epidemic, serious mental illness and childhood obesity.

I have spent forty years both as a doctor and public servant putting people first. I regret that the recent events have created a distraction from these important objectives.

Success on these issues is more important than any one person. In order for you to move forward without further disruption, I am officially tendering my resignation as the Secretary of Health and Human Services effective 11:59 PM on Friday, September 29, 2017.

You may rest assured that I will continue to support your critical priorities going ahead because failure is not an option for the American people.

Price “has spent his entire adult life fighting for others, first as a physician and then as a legislator and public servant. He was a leader in the House and a superb health secretary. His vision and hard work were vital to the House’s success passing our health care legislation,” Ryan added.

During the Obama administration, a 2013 Government Accountability Office report found a similar problem, in this case, by the Justice Department. Two luxury jets the FBI had said were needed for security against global terrorism were used instead by Attorney General Eric Holder and FBI Director Robert Mueller. Holder’s predecessors in the George W. Bush administration, Attorneys General Michael Mukasey and Alberto Gonzales, also used the jets. It came at a total cost of $11.4 million, the GAO found.

The HHS secretary isn’t required to use non-commercial flights as some national security officials are.

Fox reported that Holder, in 2014, also took at government-owned Gulfstream and flew to the Belmont Stakes thoroughbred race in New York with family members and two security offices. The trip reportedly cost the government $14,440. Holder reimbursed the government $955.

The Washington Times reported that while serving as CIA director, Leon Panetta refunded the government $630 for flights on luxury jets that cost about $32,000 per trip.

Price’s international travels had involved significant work on health issues. On May 17 and 18, Price traveled to Liberia to meet with the country’s leaders and health officials regarding the Ebola outbreak the ravaged the country in 2014. He met Liberian President Ellen Johnson Sirleaf and other top officials where he talked about the partnership with Liberia and United States government.

“Ebola survivors who met with the secretary described the significant stigma associated with the virus and continuing discrimination they face. Secretary Price shook hands with survivors, an important public gesture,” said a description by the Department of Health and Human Services.

He next traveled to Berlin to attend the G20 Health Ministerial Meeting, held on May 19 and 20. He met with German Chancellor Angela Merkel.

Topics at the meeting included preparations to combat influenza and viruses with pandemic potential, antimicrobial resistance work with World Health Organization, or WHO.

His next stop was the 70th annual World Health Assembly in Geneva, the 194-member government body of the WHO, where he spoke on May 22.

The next major travel came Aug. 20-26, where he visited China, Vietnam, and Japan.

On Aug. 23, Price delivered the keynote address at the 7th High Level Meeting on Health and the Economy of Asia-Pacific Economic Cooperation (APEC) in Ho Chi Minh City, Vietnam.