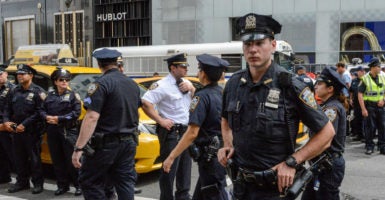 A panel of law enforcement experts discussed the importance of preventing crime instead of just responding. (Photo: Stephanie Keith/REUTERS/Newscom)

A panel of law enforcement experts, including the former top cops of New York City and Chicago, addressed some of the most pressing problems police face today, such as the need to focus on preventing crime before it occurs and how body cameras can protect police and the public alike.

Bratton made his remarks at a seminar, “Policing in America: Lessons From the Past, Opportunities for the Future,” Sept. 21 at The Heritage Foundation. Other panelists discussed questionable past law enforcement duties, accusations of systematic racism by police, and how technology can make officers’ jobs safer and easier.

Bratton, now the executive chairman of Teneo Risk, a risk-management consulting firm, said police need to be seen as collaborating with communities, instead of just suppressing crime. He said the creation of the 911 system in 1968 turned police into responders, instead of crime preventers.

He described three falsehoods that he claims different groups spread about law enforcement. The first falsehood, he said, comes from academics who say “police don’t control crime.” The second falsehood is perpetuated by the left, which says “police bias is pervasive,” and the third is the falsehood advanced by the right, which contends that “only heavy-handed tactics control crime.”

Policing “is not a government program,” Bratton said. “It’s a moral covenant. It’s keeping people safe. It’s the underpinning and the essential element of our democracy.”

Perry Tarrant, a former president of the National Organization of Black Law Enforcement Executives, said at one time, policing was a service, but then police started focusing on law enforcement.

He said police at one time had to carry out assignments of a dubious nature, such as enforce racial segregation and guard Japanese internment camps during World War II.

Tarrant said that “to move forward and have the conversation about moving forward, we have to acknowledge that history exists.”

He stressed the importance of law enforcement officials and communities jointly creating relationships, noting that “contact with the police is a first contact most people have with government.”

Tarrant added that, from a public relations perspective, law enforcement isn’t doing a very good job at telling the human interest stories that stem from what police do.

Garry McCarthy, former superintendent of the Chicago Police Department, said Obama administration Attorney General Loretta Lynch didn’t contact him when preparing a report on an investigation of policing policies and practices in Chicago.

He said he thought the Justice Department’s investigations under President Barack Obama had predetermined outcomes, because most of the reports arrived at the same conclusion, blaming systematic racism.

“In my mind, the single most challenging issue to policing is what happened in the last administration, in that data-driven policing … is now considered ‘systematic racism,’” he said. “We’ve got to put that genie back in the bottle.”

McCarthy said questionable practices do occur in law enforcement, but “the political reaction to those events is making things worse.”

He cites as an example body cameras, which can enable police to exonerate themselves in cases where the circumstances of confrontations with members of the public are in dispute. With body cameras, he said, a “definitive answer” can be ascertained in allegations of  police misconduct.

Stewart wants the Trump administration “to expand the existing technical-assistance programs that provide analytical and technical support” to police.

He specifically mentioned SMART Policing, which “pairs an analyst with a police department and a research partner” to address law enforcement issues. SMART stands for strategic management, analysis and research, and technology.

“SMART Policing is a strategic management approach that brings more science into police operations by leveraging innovative applications of research, analysis, technology and evidence-based best practices,” according to a special report published Sept. 18 by The Heritage Foundation.

The report was co-authored by Edwin Meese III, a former U.S. attorney general, and John Malcolm, vice president of the Institute for Constitutional Government at The Heritage Foundation, who co-hosted the panel discussion.