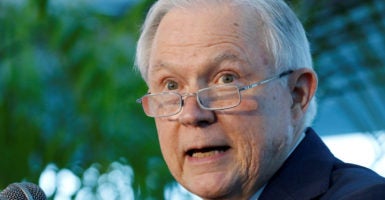 "We will enforce federal law, defend free speech, and protect students’ free expression from whatever end of the political spectrum it may come," vows Attorney General Jeff Sessions, pictured here Aug. 16 at the Port of Miami. (Photo: Joe Skipper/Reuters/Newscom)

Attorney General Jeff Sessions named names Tuesday in criticizing colleges and universities across the country that censor free speech by students and visitors.

“Freedom of thought and speech on American campuses are under attack,” Sessions said during remarks at Georgetown University Law Center in Washington.

“The American university was once the center of academic freedom, a place of robust debate, a forum for the competition of ideas,” he said. “But it has been transforming into an echo chamber of political correctness and homogeneous thought, a shelter for fragile egos.”

As if on script, protesters outside demonstrated against the attorney general’s speech.

With regard to the far-left group Antifa, which considers itself “anti-fascist” but has disrupted speeches on several college campuses, Sessions said its name was “Orwellian,” since fascist tactics include shutting down speech.

He also compared some the tactics of some campus hecklers to those used by the Ku Klux Klan.

The attorney general also vowed that the Justice Department would take action on protecting the First Amendment.

“Starting today, the Department of Justice will do its part in this struggle,” Sessions said, adding:

We will enforce federal law, defend free speech, and protect students’ free expression from whatever end of the political spectrum it may come. To that end, we are filing a Statement of Interest in a campus free speech case this week, and we will be filing more in the weeks and months to come.

A statement of interest is an amicus brief filed in cases, most frequently used by the Justice Department in past civil rights cases.

The case is Uzuegbunam v. Preczewski, a lawsuit filed by a student against Georgia Gwinnett College to challenge a school policy that limited student speech to two small “free-speech zones”

Sessions first talked about countries that don’t allow the freedom to question the government. He then cited Kellogg Community College in Battle Creek, Michigan, where students sued administrators after being arrested last year for handing out copies of the Constitution:

When the young people bravely refused to stop, citing their right to free speech, the local official had them arrested and handcuffed and jailed. This troubling incident could have happened under any number of tyrannies where the bedrock American idea of freedom of thought and speech have no foothold whatsoever. But this incident happened right here in the United States just last year at a public college in Battle Creek, Michigan. A public official actually had students jailed for handing out copies of the United States Constitution.

Similarly, Sessions noted that a student filed suit against Los Angeles Pierce College in California, a public college that the student said had prohibited him from distributing Spanish-language copies of the Constitution.

The attorney general referenced the cancellation of political scientist Charles Murray’s speech at Middlebury College because of what has become known as the “heckler’s veto.”

“Student protesters violently shut down a debate between an invited speaker and one of the school’s own professors. As soon as the event began, the protesters shouted for 20 minutes, preventing the debate from occurring,” Sessions said, adding:

When the debaters attempted to move to a private broadcasting location, the protesters—many in masks, a common tactic also used by the detestable Ku Klux Klan—pulled fire alarms, surrounded the speakers, and began physically assaulting them. In short, Middlebury students engaged in a violent riot to ensure that neither they nor their fellow students would hear speech they may have disagreed with.

Just over a week ago, after the Orwellian-named ‘anti-fascist’ protesters had successfully shut down numerous campus speaker events in recent months with violent riots, Berkeley was reportedly forced to spend more than $600,000 and have an overwhelming police presence simply to prove that the mob was not in control of the campus. In advance, the school offered counseling to any students or faculty whose sense of safety or belonging was threatened by a speech from Ben Shapiro. … In the end, Mr. Shapiro spoke to a packed house. And to my knowledge, no one fainted, no one was unsafe.

The Federalists against the Anti-Federalists, Abraham Lincoln against Stephen Douglas, Dr. Martin Luther King Jr. against George Wallace; indeed, it was the power of Dr. King’s words that crushed segregation and overcame the violence of the segregationists. At so many times in our history as a people, it was speech—and still more speech—that led Americans to a more just, more perfect union.

James Madison knew this when, as part of his protest against the Alien and Sedition Acts—the speech codes of his day—he said that the freedom of speech is ‘the only effectual guardian of every other right.’