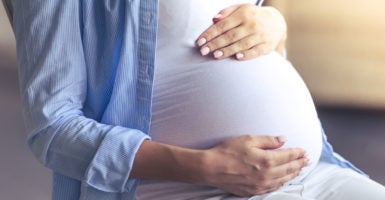 “This is an important case because Hawaii goes even further than California did, and they are clearly singling out pregnancy centers,” says Kevin Theriot, senior counsel at Alliance Defending Freedom. (Photo: iStock Photos)

A conservative legal organization went to court Friday in Hawaii over a law that forces pregnancy care centers to provide free advertising for abortion.

“They are requiring pregnancy centers [that] just give away diapers and baby clothes to refer women to the state, to a website that connects them with certainly abortion causing drugs, and … abortionists,” Kevin Theriot, senior counsel at Alliance Defending Freedom, told The Daily Signal in a phone interview.

“This is an important case because Hawaii goes even further than California did, and they are clearly singling out pregnancy centers,” Theriot said.

The Hawaii law is similar to a law passed in 2015 in California, which required “licensed medical centers that offer free, pro-life help to pregnant women to post a disclosure saying that California provides free or low-cost abortion and contraception services,” according to Christian legal group Alliance Defending Freedom.

The lawsuit, Calvary Chapel Pearl Harbor v. Chin, seeks that Hawaii stop the enforcement of the law and give back federal funds the state received “conditioned on the state’s commitment not to force pro-life pregnancy centers to make abortion referrals,” according to Alliance Defending Freedom.

Theriot, along with Ken Connelly, a legal counsel with Alliance Defending Freedom, argued at U.S. District Court for the District of Hawaii in Honolulu Friday morning on behalf of Hawaiian pregnancy care centers.

National Institute of Family and Life Advocates founder and President Thomas Glessner said in a statement to The Daily Signal that the law is detrimental for pro-life institutions.

“Hawaii’s threat to pro-life pregnancy care centers and medical clinics counts among the most egregious violations of constitutional religious and free speech rights in the nation,” Glessner said.

Theriot said he hopes the Supreme Court will intervene in the California case, National Institute of Family and Life Advocates v. Becerra. The court is expected to consider taking the case in early October. He added:

The case has national implications. It certainly has implications for the five small pregnancy centers here in the Hawaii islands, and we’re hopeful that the judge will take notice of that, and at least recognize that there is a serious threat to the rights and the ability of these pregnancy centers to survive, and go ahead and put the law on hold while we figure out exactly what is going on nationally, especially if the Supreme Court decides to take it up.

“This is like the government forcing the local pacifist group to post directions to the nearest military recruiting depot,” Cathy Ruse, senior legal fellow at the Family Research Council, said in a statement provided to The Daily Signal.

In the war of ideas, the government should never force one side to carry the flag of the other. It’s not fair. More than that, it’s government-forced speech, and that’s not constitutional.

Melanie Israel, research associate for the DeVos Center for Religion and Civil Society at The Heritage Foundation, said the law is unfair to the state’s pregnancy care centers.

The abortion industry sees these centers as a threat, because they offer women choices beyond abortion. The state government’s attempt to force these centers to promote a procedure that directly violates the core mission and purpose of their work is an affront to rights of conscience and free expression.

Kristan Hawkins, president of Students for Life of America, said in a statement provided to The Daily Signal that the law must be stopped.

“The court should immediately block the law and allow pregnancy resource centers to continue their life-saving and life-supporting work without having to go against their moral beliefs and promote the abhorrent act of abortion,” Hawkins said.