What to Look for in Germany’s Upcoming Election 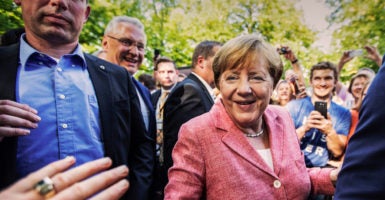 On Sunday, one of the most important elections in Europe will take place.

The German people go to the polls to elect a new Parliament, and with it, decide whether Angela Merkel will remain chancellor.

Germany is one of the largest countries in Europe. It is both the most populous European country and has its highest gross domestic product. An important NATO partner for the United States, Germany hosts vital military bases with over 36,000 U.S. troops.

The outcome of Sunday’s election with have implications for transatlantic security, free trade, and Europe’s response to Russian aggression.

Merkel has led Germany since 2005. Currently, her center-right Christian Democratic Union of Germany, along with fellow Union faction party the Christian Social Union in Bavaria, govern in a grand coalition with the center-left Social Democratic Party of Germany.

Merkel’s popularity as a leader has largely been driven by Germany’s economic success.

In March 2005, Germany’s unemployment rate was 12.6 percent, yet today it is 3.7 percent. Last year, Germany’s $280 billion trade surplus was the second highest in the world, in large part thanks to the euro, which keeps German exports cheaper than they otherwise would be.

The Christian Democrat Union and Christian Social Union are expected to win the most seats in Parliament (or the “Bundestag,” as it is known).

Following the federal elections in 2009, the Christian Democrats and Christian Social Unionists formed a coalition with the Free Democrats. The Free Democrats, who failed to retain seats in Parliament in the 2013 election, are a socially and economically liberal party that is generally pro-business and free market.

The Free Democrats are seeking a return to the Bundestag and potentially a new coalition with Merkel.

A coalition with the Free Democrats could allow Merkel to move toward stronger free trade policies than she has been able to achieve in coalition with the Social Democrats. While Germany ranks relatively high as the 26th freest economy in The Heritage Foundation’s 2017 Index of Economic Freedom, it has fallen from 19th in 2013.

A major issue in Germany’s election is the ongoing impact of the migrant crisis. Germany has taken in almost 2 million migrants, and Merkel’s open door policy created its own pull on refugees seeking asylum in Europe.

The decision has had real world effects. Germany has since been the target of terrorist attacks, including an attack on a Christmas Market in Berlin last December. My colleague Robin Simcox recently wrote:

More attacks were planned against Germany in 2016 alone than during the entire period from 2000 to 2015. Merkel is right—Islamist terrorism was ‘something [Germany] already had.’ But now, thanks to her policies, the country faces a lot more of it.

The next government in Berlin will continue to grapple with the ongoing impact of the migrant crisis. In addition to security concerns, questions remain about the impact of migrants on German society, as well as the increasing financial costs of new migrants.

Germany spent 21.7 billion euros on migrants in 2016, and the nation’s finance ministry expects to spend over $86 billion from 2017 to 2020 “feeding, housing, and training refugees as well as helping their home countries to stem the flow.”

Germany, along with countries like Greece and Italy, continues to pressure many nations in Eastern Europe to accept migrant quotas in the name of European Union “solidarity.” This ongoing dispute reflects the deeper power struggle that exists between the EU Commission and member states, making the migrant crisis a key testing ground for the future of sovereignty in Europe.

Merkel’s migrant policies have in part given rise to the populist Alternative for Germany, and has caused ever-increasing friction with the Christian Social Union, the Bavarian sister party of the Christian Democratic Union which opposes Merkel’s open door policy toward migrants.

Under Merkel’s chancellorship, Germany has begun to take on a greater role within NATO, increasing German defense spending and pledging to reach the NATO benchmark of spending 2 percent of GDP on defense.

Merkel has also deployed German troops to Lithuania, where they serve as the framework nation for NATO’s Enhanced Forward Presence in that Baltic state.

In contrast, Social Democratic leaders have scoffed at the 2 percent NATO spending goal. Martin Schulz and Thomas Oppermann recently said, “It’s not only unrealistic; it is simply the wrong goal.”

Schulz, the former president of the European Parliament, is also a strong supporter of EU defense integration efforts, with the eventual goal of creating an EU army.

Sunday’s election will also significantly guide future German and EU strategies to counter Russian aggression, including the maintenance of sanctions on Russia for its annexation of Crimea and continued aggression in Donbas.

Merkel has thus far championed sanctions remaining in place. Some other political parties in Germany, including her chief rival Social Democrats, generally favor a more conciliatory approach toward Russia.

Much like with the U.S., Russia is looking to influence the outcome of Germany’s election. Thomas Haldenwang, deputy president of Germany’s domestic security agency, reportedly said Russia is utilizing active measures to influence German public opinion.

German political parties and government institutions have also come under Russia cyberattack. For instance, a May 2015 cyberattack on the Bundestag resulted in 16 gigabytes worth of data being stolen.

A recent Atlantic Council report identifies other avenues by which Russia is seeking to influence German political discourse, including fostering links to pro-Kremlin political parties in Germany.

The next government in Berlin will grapple with these key issues, along with questions of energy security, Germany’s increasingly sour relations with Turkey, and whether or not the EU has any appetite to actually reform post-Brexit.

The outcome of Sunday’s election and the type of coalition that takes shape, should no party win an outright majority, will help illuminate where German policy on these key issues is likely to tack.

American policymakers should be sure to pay attention.