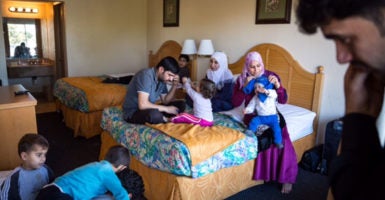 The Trump administration will decide within 10 days how many refugees may resettle next year in the United States, a State Department official said Wednesday at The Heritage Foundation.

During a 120-day suspension of refugees entering the U.S. ordered by President Donald Trump, officials studied the specifics of vetting refugees, the costs of resettling them, and the importance of assimilation, said Lawrence E. Bartlett, director of refugee admissions at the State Department.

As Trump pledged during his campaign, he signed an executive order March 6 temporarily suspending the U.S. Refugee Admission Program, the appendage of the State Department that manages resettlement of refugees here.

That order also capped the annual number of resettled refugees at 50,000, down from the 110,000 approved by the Obama administration.

“The State Department and the Department of Homeland Security [are] working very closely with the vetting partners, the FBI, the National Counterterrorism Center, others who actually perform the vetting to really see how those can be improved,” Bartlett said during an event on refugee policy at The Heritage Foundation.

The State Department official said a Heritage Foundation report correctly noted that refugees are the most highly vetted immigrants coming into the United States.

“That has been borne out in the current administration as we’ve been doing these reviews, but we still want to see where can improvements be made,” Bartlett said, adding:

We’ve also been tasked with doing cost studies on what does it cost to resettle refugees to the U.S. and how does that compare to providing assistance overseas. We are looking at improvements to assimilation programs, so each of the agencies—the State Department, Health and Human Services, as well as the Department of Homeland Security—are looking at what we can do … to improve that. The ongoing question is what will the size of the program be next year. … That decision has not been made, but we do expect it to be made by the end of September.

The first order, on Jan. 27, affected those from Iran, Iraq, Libya, Somalia, Sudan, and Yemen for 120 days. The order suspended travel indefinitely from Syria.

Security and assimilation are key matters to consider in refugee policy, experts say, as do officials with the Trump administration and the United Nations.

“I’m happy to say we are up to 31 countries involved in [refugee] resettlement. So we did see some increases last year,” Yungk said during a panel discussion, adding:

I think the most notable upswing responses were in Europe. If you take the total number of offered slots for the U.S., Canada, Australia, the European countries, New Zealand, [and] a couple of countries in South America, it only adds up to about a 5 to 8 percent range of being able to respond to the total refugee need.

The U.N. has invested heavily in vetting and fighting fraud, including using biometric registration that includes iris scans and fingerprint collections, Yungk said.

Resettlement is not the preferred route, he said, and “99.5 percent” of refugees won’t be resettled. He also referenced the Heritage report, released in July, about the U.S. resettlement system.

“There are probably areas where we would not be in complete agreement, not surprisingly, but I do think there are many areas where we do share the views of the report in principle or in specifics,” Yungk said.

The major concerns are security and assimilation, said Joshua Meservey, Heritage’s senior policy analyst on Africa and the Middle East and one of three authors of the think tank’s report, titled “The U.S. Refugee Admissions Program: A Roadmap for Reform.”

It’s the last group that poses the biggest threats, Meservey said, and this has been a particularly notable problem in Europe.

“This 1.5 generation can somewhat feel a bit unmoored, feel lost between two cultures and two worlds. They don’t strongly identify with their parents’ home country, which they may have no memory of, and they may not identify with their new country either; they’re still very aware of their difference,” he said.

There is no direct causal effect, he said, but a growing “correlation between folks who radicalize and their membership in this 1.5 generation.”

Meservey called assimilation the best predictor of refugee success in the United States, and those who don’t assimilate with American values face consequences.

“If you have a deep affinity and love for the United States, you’re not going to involve yourself in Islamist terrorist activity,” Meservey said.

Quality of life is another key issue, the Heritage policy analyst said, and those that don’t assimilate often live in enclaves, isolated from much of the country and more prone to unemployment and social problems.

Some incorrectly view integration and assimilation in a mutually exclusive way, said Joseph Cassidy, a global fellow for the Global Sustainability and Resilience Program at the Wilson Center.

The two are complementary, Cassidy argued during the panel discussion. Some type of civics education and learning English are important to help refugees assimilate, he said.