Do We Need 641 Penalties for Nonviolent Drug Crime After Punishment? 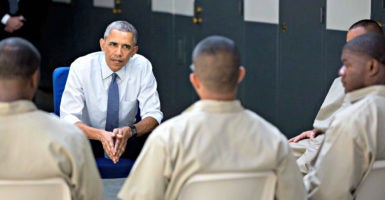 Federal laws and regulations carry more than 600 restrictions that may be applied to those convicted of nonviolent drug offenses, according to a new government report.

The report from the Government Accountability Office, published last week, contains the results of a yearlong study of what are called federal “collateral consequences”: civil restrictions on the rights and entitlements of individuals with criminal convictions.

The GAO found that 641 of those little-known rules could apply to individuals convicted of a nonviolent drug offense, defined as any federal drug offense that didn’t involve the attempted, threatened, or actual use of physical force—or a substantial risk that force might be used.

And those rules cover so many parts of a person’s life—from employment and housing to the constitutional rights to vote and carry a firearm—that if administered arbitrarily, some may needlessly frustrate reintegration into society and encourage a return to crime.

In the Comprehensive Addiction and Recovery Act of 2016, Congress asked the GAO to look at one piece of the regulatory maze of collateral consequences: those the federal government imposes on individuals convicted of “nonviolent drug-related offenses.”

Congress also sought justifications for those rules and their effect on individuals “in resuming their personal and professional activities.” And it sought possibilities for mitigating the burdens on individuals who complete recovery programs and otherwise become law-abiding, productive members of their communities.

Yet some may consider the central phrase of the GAO report, “nonviolent drug offender,” to be an oxymoron.

John Malcolm, vice president for The Heritage Foundation’s Institute for Constitutional Government, writes: “It is undeniable that drug dealing, which is often carried out by gangs, and almost invariably involves the actual or threatened use of violence and the inherent risk of overdose, is a dangerous and harmful activity.”

But as Malcolm and I argue in a Heritage report, “Collateral Consequences: Protecting Public Safety or Encouraging Recidivism?,” “it is not in anyone’s best interests to consign ex-offenders to a permanent second-class status. Doing so will only lead to wasted lives, ruined families, and more crime.”

According to the GAO report, of those 641 federal collateral consequences for nonviolent drug offenders, 497 may be effective for life. Only 131 allow individuals to earn relief in meritorious cases—for example, by completing rehabilitation—without a pardon.

That is only a sliver of the more than 48,000 collateral consequences of criminal convictions at the local, state, and federal levels. Fully 60 to 70 percent of those relate to employment opportunities. Most are rational and reasonable restrictions designed to protect public safety by, for example, keeping child predators away from children and keeping fraudsters off Wall Street.

And not every collateral consequence reasonably relates to every offender’s crime. Especially in such instances, these consequences may needlessly undermine public safety and a cost-effective criminal justice system.

Consider one example from the GAO report: A federal statute, 23 U.S.C. § 159, withdraws certain federal funds from states that fail to revoke or suspend the driver’s license of a person convicted of “any drug offense.” That sanction applies whether or not the person used a car in the course of breaking the law.

Why should government take away the driver’s license of a person who may need to drive to work or take his or her children to school, and who poses no extraordinary risk behind the wheel?

According to several contributors to the GAO report, reducing some of these regulatory burdens might help ex-offenders secure lawful employment as well as housing and education, and even “potentially reduce the likelihood of reoffending.”

These contributors also advised that any federal action on collateral consequences “should strike the appropriate balance” between preserving those that promote public safety and addressing those that can “cause unnecessary burdens and potentially increase the likelihood that individuals [will] reoffend.”

As the GAO report shows, the public would benefit if lawmakers keep some key questions in mind while they scrutinize this issue.

One, are the collateral consequences on the books necessary for public safety and reasonably related to the criminal offenses that trigger them?

Two, what if any procedures are available for individuals to seek relief from certain collateral consequences in meritorious cases?

As a general principle, lawmakers should encourage ex-offenders to become law-abiding and productive members of society, not pile on so many burdens in the form of collateral consequences as to put that out of reach.