How GOP Attorneys General Forced Trump to Act on DACA 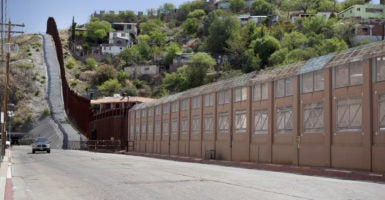 Nine state attorneys general gave the Trump administration a deadline of Sept. 5 to rescind the DACA program, which has given legal status to about 800,000 illegal immigrants. (Photo: Paulien van de Loo/ZUMA Press/Newscom)

President Donald Trump seems to be hatching a plan with Democrats in Congress about codifying Deferred Action for Childhood Arrivals, or DACA, through a bill to grant amnesty to those brought illegally to this country as children. But the policy imposed by his predecessor, Barack Obama, might have continued on an executive basis without debate had it not been for a group of state Republican attorneys general.

Nebraska Attorney General Doug Peterson said he had little choice but to join a lawsuit challenging the Trump administration to reverse an Obama administration executive action on illegal immigrants who arrived in the United States as children.

“Regardless of the political party, if the rule of law means anything, it means we have to speak up for what is right, regardless of who is in the White House,” Peterson told The Daily Signal in a phone interview.

Peterson was among nine state attorneys general that gave the Trump administration a deadline of Sept. 5 to rescind the DACA program, which has given legal status to about 800,000 illegal immigrants.

After a lawsuit by 26 state attorneys general, federal courts already struck down an executive action that would have expanded it to parents, called Deferred Action for Parents of Americans and Lawful Permanent Residents (DAPA).

Peterson didn’t want to speculate on whether the administration would have acted without pressure from the attorneys general, or to speculate on why fewer than half as many of those top state law enforcement officials were willing to sue over DACA compared with DAPA.

“I believe the deadline prompted the administration to act when it did,” Peterson said. “I can’t answer for others, but for me, DACA has the same legal principles as DAPA.”

“It was necessary to do this because I believe the public is aware this is clearly a matter for Congress,” Peterson said. “I keep hearing more and more that Congress can’t get anything passed. I understand that frustration, but just because we might sometimes be frustrated with Congress’ inability to act on something, that doesn’t mean executive orders can be a backup plan.”

Texas Attorney General Ken Paxton led eight other Republican attorneys general who were set to challenge DACA. The other attorneys general were Patrick Morrisey of West Virginia, Derek Schmidt of Kansas, Jeff Landry of Louisiana, Leslie Rutledge of Arkansas, Alan Wilson of South Carolina, Steve Marshall of Alabama, and Lawrence Wasden of Idaho, along with Peterson.

Trump met Wednesday night at the White House with House Minority Leader Nancy Pelosi, D-Calif., and Senate Minority Leader Charles Schumer, D-N.Y. Both sides had somewhat differing accounts of the meeting, but largely seemed to say the border wall would come at a later time, while both sides would agree to a legislative fix on DACA in exchange for increased border security.

In an email message to conservatives, former Virginia Attorney General Ken Cuccinelli, now the president of the Senate Conservatives Fund, praised the state attorneys general for their nonpartisanship.

“Whatever our different views of DACA and illegal immigration, these nine, and only these nine, stayed consistent in standing up for the consistent application of the law and for the re-establishment of the separation of powers,” Cuccinelli wrote. “The reason this is so unusual is that all nine attorneys general are Republicans, confronting a Republican president on an issue of principle and law.”

That NEVER happened—not once—during President [Barack] Obama’s entire eight years of rule. To be clear, there was NEVER one instance of Democratic Attorneys General organizing a challenge to even the most outrageous of President Obama’s executive overreaches. In one or two individual cases that I can remember, one or two Democratic AGs from coal states would allow their name to be used in support of an otherwise-GOP-led effort to rein in the outrageous overreaches of Obama’s EPA.

The hardest thing to do in politics is to challenge your own leadership when they are wrong. The backbone demonstrated by these nine Attorneys General should be lauded by all of us for the principled commitment to the rule of law, no matter the consequences to themselves and regardless of the fact that standing for the Constitution in this instance put them at odds with a President of their own party. There was no certainty (to say the least!) how President Trump would handle DACA, and on a purely political basis, there was tremendous downside political risk to these nine AGs, yet they did the right thing.

The Daily Signal contacted the offices of each of the nine attorneys general Wednesday, and most referred to previous statements released on the day Sessions made the DACA announcement.

The Arkansas attorney general’s office initially indicated it would provide a statement, but later said the initial statement after the Sessions speech was all Rutledge had to say at this point.

“I commend President Trump for rescinding the DACA program created by President Obama,” Rutledge said in last week’s statement. “While we are a compassionate country, the United States is a country of laws, and President Trump recognized that President Obama’s DACA program went far beyond the executive branch’s legal authority. Congress has always been the proper place for this debate, and I am pleased that the President is granting Congress an additional six months to legislatively address this issue.”