Texas to Fight on After Federal Judge’s Sanctuary Ruling 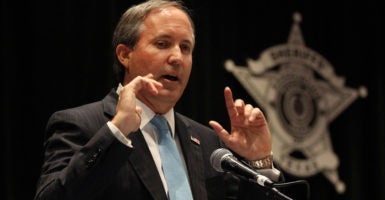 “Texas has the sovereign authority and responsibility to protect the safety and welfare of its citizens," says Texas Attorney General Ken Paxton. (Photo: John Davenport/ZUMA Press/Newscom)

A Texas case, in which a federal judge halted the state’s crackdown on sanctuary cities, could serve as a test case for federal sanctions on such municipalities, an immigration law expert said.

U.S. District Judge Orlando Garcia ruled Wednesday that the part of the Texas law requiring cities to assist federal immigration officials was unconstitutional, and put a temporary halt on the law.

Currently, Chicago and San Francisco are suing the Justice Department over a threat to withhold grants from sanctuary cities.

“These are two separate legal questions,” Art Arthur, a former federal immigration judge and immigration counsel for the House Judiciary Committee, told The Daily Signal. “These cases are all politically motivated.”

Arthur anticipates the district court ruling will be overturned.

“I expect certain aspects of the injunction will be reversed after review by the [5th U.S. Circuit Court of Appeals],” said Arthur, now a resident fellow in law and policy at the Center for Immigration Studies.

“Senate Bill 4 was passed by the Texas legislature to set a statewide policy of cooperation with federal immigration authorities enforcing our nation’s immigration laws,” Paxton said in a statement “Texas has the sovereign authority and responsibility to protect the safety and welfare of its citizens. We’re confident SB 4 will ultimately be upheld as constitutional and lawful.”

The pro-immigration advocacy group UnidosUS, formerly known as the National Council of La Raza, praised the ruling in a statement.

“We’re encouraged by [Wednesday’s] ruling against SB 4, a law that would have opened the door for rampant racial profiling and would have devastating consequences on so many Latino families, other communities of color, public safety, and the Texas economy,” UnidosUS President Janet Murguía said in a statement.