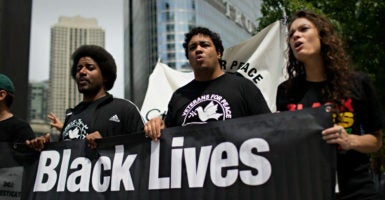 After the events in Charlottesville and Boston of recent days, expect Black Lives Matter to be both energized as a movement and for the broader left to double down on race as a means to achieving radical social upheaval.

Yet even as the movement regains steam with a focus on the physical dismantling of statues and artifacts, a fissure is expanding within the ranks of Black Lives Matter.

I’m a behavioral science researcher who studies the deeply held values and motivations that drive mass movements. The recent re-emergence of Black Lives Matter in Charlottesville, Boston, and beyond dovetails with the findings of research I conducted with adherents of the movement over this past year, which explains what draws both the professional and grassroots activists to associate with this cause.

The Frontier Lab conducted in-depth research interviews with Black Lives Matter activists and organizers. This analysis, a report titled “Privileged and Oppressed,” mapped their psychographic connections to the movement.

The findings allow us to evaluate what types of stimuli will cause the movement to wane or become energized—a helpful lens through which to view current events and to explain what they mean to those on the inside of Black Lives Matter.

With this mass movement, as with other mass movements we’ve studied (such as the protests against Wisconsin Gov. Scott Walker, Occupy Wall Street, and the campaigns of President Barack Obama and Hillary Clinton), it is crucial to distinguish the behind-the-scenes operatives from the activists.

These two groups have wholly distinct reasons for affiliating with the movement.

Many operatives from Black Lives Matter had previously participated in Occupy Wall Street. They described emerging from the failure of that movement disheartened, as it failed to achieve lasting societal change.

At the very least, they had sought some kind of legislative signal that their efforts had not been in vain.

As these professional activists refocused their energies toward a new cause—Black Lives Matter—they told us how they hoped that, this time, they would be able to seize tangible victories. The four motivating operatives values we identified were “pride,” “confidence,” “excitement,” and “purpose.”

This hunger for tangible victories is exactly the context within which we must evaluate the current focus on statues: a “concrete” demonstration of the power of their movement, most importantly to its own adherents. This is precisely what Occupy had failed, psychologically, to provide to them.

While some on the outside may criticize the destruction of statues as being utterly useless for the black community, which Black Lives Matter purports to serve, our research shows that it is best to understand this approach as an internally focused strategy to energize supporters.

Operatives also viewed tangible victories as a signal that their activism careers were not time wasted, and would allow them to be capable and effective at their organizer roles. Without these victories, they were left questioning whether their sense of purpose in life was being achieved. A corollary to Black Lives Matter has been the emergence of the new emancipation movement. This movement places the left’s current-day struggle for equality of outcome (as opposed to the prior notion of equality of opportunity) within the historic context of the abolitionist movement of the 19th century.

This should be immensely satisfying to operatives, who told us that one of the most appealing aspects of Black Lives Matter was its “renewal of the historic anti-racist struggle.”

Importantly, placing the Black Lives Matter agenda within a historic lineage appealed to them not because they would finally be achieving freedom or even equality of outcome for black Americans, but rather because it signaled to the watching world that they were on the “right side of history.”

In this way, Charlottesville has been a psychological victory for operatives on the left who had most recently attached themselves to Black Lives Matter as a means for fulfilling deeply held desires for the aforementioned values of pride, confidence, excitement, and purpose.

But recent events are playing out much differently for another segment—the rank-and-file activists. Their identified values of “empowerment,” “hope,” community,” and “excitement” suggest they are energized by the events in Charlottesville and Boston for wholly different reasons.

One aspect that the movement most provided to them was the ability to circumvent the media in getting their message out. The media attention of the past week, which presented their action alongside Antifa within a race-based narrative, will be reassuring that their messaging is within their control.

The media attention will also fulfill another value held by activists: the deeply held desire for excitement that comes with being involved with historic action—actions they will be able to tell their grandchildren they were involved with.

Even as the operatives and allies take energy from Charlottesville and Boston, the third segment we tracked, “allies,” is experiencing more tension than ever with their fellow adherents.

Allies, who are the non-black (often “white,” as most interpret) activists who desire to further the cause of Black Lives Matter, are motivated by “guilt,” “security,” “community,” and “fear.”

Operatives described to us how careful they were in considering the optics of their mass action. White allies recounted to us being told either to make their presence unobtrusive, or to stay at home when public events were being held. For the operatives managing the perception of the movement internally and externally, it is problematic to have a white face, even momentarily.

With the murder of Heather Heyer in Charlottesville, this tension only became more pronounced.

One black activist described the problem on the Black Youth Project website, complaining that activists were “appropriating” the #SayHerName hashtag—which had been used to honor black women who had died—in order to bring attention to Heyer, a white woman.

White people and those who love them and their promised-but-never-fulfilled hope for solidarity are telling you that you should know that there are Heather Heyers in the world. They are telling you to #SayHerName, appropriating the work of the black feminists who created this call to action in response to black women’s deaths at the hands of the state routinely going ignored. They are saying that you must appreciate Heyer. That you must hold space for her. That she does more than some of y’all, as if this isn’t just again erasing the deaths all black women are withstanding at the hands of the state at every moment.

Another author has observed the same values among allies that we tracked in our study: the desire to further their own claims to being oppressed, be they related to gender, sexual orientation, religion, or economic realities:

I suspect that a sizable majority of white people outraged by the events in Charlottesville are not fighting for black liberation; they are expressing discontent with explicit white supremacy. They do not wish to overthrow white supremacy in its totality; they seek to keep it wrapped up in euphemisms. White supremacy ‘#IsNot(Them)’—except it is.

I am even more suspicious of white people who do put their bodies on the line because they do so in a warped sense of self-interest. Many are actively involved with extensive pro-black organizing because they believe their aspirational “freedom” is attached to ours—but it’s not.

For the allies, when one oppressed cause is elevated (in this case, the cause of oppressed black lives), their own cause will similarly be strengthened.

Taken together, these psychological explanations for why people affiliate with Black Lives Matter can help us predict how recent events will affect the movement’s internal dynamics and external optics.

For operatives and activists, Charlottesville and Boston will be energizing and fulfilling. But this may also be the beginning of a stronger internal push to silence the voices of white allies, as the broader movement cultivates a more pervasive race-based narrative.

As the research shows, the allies desperately desire a way to identify as standing up against injustice. How they will navigate their way to this end within Black lives Matter—a movement organized by ranking levels of privilege—remains to be seen.