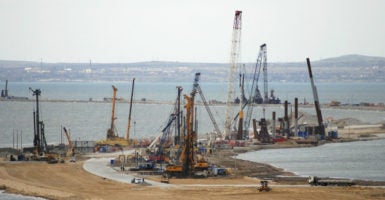 Russian authorities are constructing a bridge across the Kerch Strait that would give the Kremlin easier access to the Crimean Peninsula. (Photo: Staff/Reuters/Newscom)

In May 2015, Russia began constructing a planned 11.8-mile bridge across the Kerch Strait, a body of water that sits between the Black Sea and the Sea of Azov.

The Russian bridge project is meant to connect the Russian mainland with the Crimean Peninsula, the region of Ukraine that Russia illegally annexed in 2014.

Two weeks ago, Russia announced temporary closures of the Kerch Strait to accommodate bridge construction. The closures have cut off Ukraine’s southeast coast, including Berdiansk and the strategically important Mariupol, Ukraine’s 10th-largest city and a key port for exports like Ukrainian steel.

Currently, Russia can only access the Crimean Peninsula by air and sea. The bridge project would create a rail and road link, and further entrench Russia’s position on the annexed peninsula.

Part of a December 2003 bilateral agreement signed between Russia and Ukraine is a stipulation that “mercantile vessels and other state non-commercial vessels flying the flags of the Russian Federation and Ukraine have free navigation in the Sea of Azov and the Kerch Strait.”

Ukraine’s Deputy Minister of Infrastructure Yuriy Lavrenyuk recently stated that Ukraine would sue Russia over the closure of the Kerch Strait pursuant to the agreement.

While this is not the first time Russia’s navy has closed the Kerch Strait, it is the latest example of Russia’s ongoing illegal aggression against Ukraine.

Last September, the U.S. Treasury expanded sanctions on Russia for its illegal annexation of Crimea and specifically targeted companies and individuals associated with the Kerch bridge project. U.S. policymakers should now condemn Russia’s closure of the Kerch Strait, as well as its ongoing occupation of Crimea.

Working conditions for construction workers employed on the bridge project have been described as slave-like. Some residents of the Ukrainian town of Kerch in Crimea were reportedly expelled from their homes and moved to shabbily built apartments to make way for construction of the bridge and an adjoining highway project.

Despite significant doubts about the economic viability of the bridge, which may cost as much as $5 billion to build, the aggressive timeline to completion (currently scheduled for the end of 2018), as well as the geological suitability of the strait as a site for a bridge, Russia continues to build.

Since the time of Crimea’s annexation, almost 5 percent of Ukraine’s landmass and more than half of its coastline have been under illegal Russian occupation. In addition, Russia has also claimed rights to valuable underwater resources off the peninsula.

However, such a move should be incorporated within a larger strategy for assisting Ukraine. This larger strategy should include the issuance of a nonrecognition statement on Crimea, as well as the condemnation of Russia’s ongoing illegal actions in Crimea and the Black Sea region, such as Russia’s closure of the Kerch Strait.

As with Russia’s 2008 invasion of Georgia, Putin has often found the lazy days of August when many Western leaders are on vacation a convenient month to initiate some new aggression against a neighboring state.

In the case of the closure of the Kerch Strait, American policymakers should make clear they are still watching.