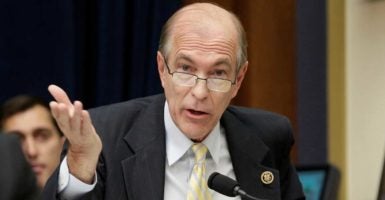 The business community of South Carolina is pressuring Republican Sens. Lindsey Graham and Tim Scott to oppose President Donald Trump’s nomination of a critic of the Export-Import Bank to run the institution.

Thus far, the most vocal critics of the nomination of former Rep. Scott Garrett, R-N.J., have been large national business groups and Senate Democrats. Garrett, while serving as a member of Congress, opposed the bank as a form of crony capitalism.

The Export-Import Bank is frequently derided by conservatives as “the Bank of Boeing.” General Electric and Caterpillar are also major beneficiaries of the federally subsidized loans. More than half of the loans went to those three companies, critics note.

“Boeing and GE are in the state, but the reality is, the suppliers to Boeing and GE are small manufacturers, who indirectly benefit from the Export-Import Bank,” Ted Pitts, South Carolina Chamber of Commerce president, told The Daily Signal on Thursday.

The National Association of Manufacturers, the Business Roundtable, and other industry groups oppose Garrett’s nomination since he opposes the mission of the bank. The South Carolina chamber is one of the few state groups to vocally come out against the nomination, issuing a strong public statement in July. Scott is a member of the Senate Banking, Housing, and Urban Affairs Committee.

“We have communicated with both senators and made it clear where the South Carolina business community stands, but we haven’t heard back from them definitively,” Pitts said in a phone interview.

Neither the offices of Graham nor Scott responded to multiple phone and email inquiries on Thursday. Scott is a conservative, while Graham is a moderate Republican. The Senate is currently in recess.

A confirmation hearing for Garrett hasn’t been scheduled yet, said Rob Sumner, spokesman for Senate Banking Committee Chairman Mike Crapo, R-Idaho, in an email. The committee will make an announcement when a date is set.

Garrett and other members of Congress supported the bank’s closure in the past. If confirmed, he could not shutter the bank—which would take an act of Congress. But he could bring needed reforms, said Andy Roth, vice president of government affairs for the Club for Growth, a conservative free-market advocacy group.

“The nomination is in line with the president’s ‘drain the swamp’ agenda,” Roth told The Daily Signal in a phone interview. “At least Garrett can bring transparency to a lot of the bad deals that have gone through under a shroud of secrecy, covered by taxpayer money.”

The Club for Growth and seven other conservative groups, including Heritage Action for America, signed on to a letter to Crapo on Aug. 7 denouncing the opposition to Garrett’s nomination. The letter says:

On behalf of the following organizations representing millions of Americans, we write to strongly denounce the special-interest business groups that are urging the White House to drop the appointment of Scott Garrett as the next president of the Export-Import Bank. …

As recently as 2015, the Bank had almost 800 fraud claims levied against it. There have been 85 indictments, 48 criminal judgments, and 66 years of prison sentences brought to bear because of the Bank’s activities. Letting special interests continue to control the Bank’s leadership and operations will only extend this disastrously corrupt track record.

A preferred solution would be closing the bank entirely, rather than just having a critic running it, Diane Katz, senior research fellow in regulatory policy at The Heritage Foundation, told The Daily Signal.

“The bank is defined by cronyism. Could Garrett pursue reforms? Certainly, but he can’t impose them unilaterally,” Katz said. “It’s better to have a critic than to have a cheerleader.”

She added that many are upset by Trump’s reversal—having supported the elimination of the bank as a candidate, to deciding to keep it in April.

“I don’t want to imply that Garrett is a good substitute for eliminating the bank,” Katz said. “The critics I know and respect who want the bank shut down are not appeased by the appointment of Garrett.”

In April, Trump nominated Garrett to be president of the controversial bank and former Rep. Spencer Bachus, an Alabama Republican and bank supporter, to be a board member.

Garrett was a founding member of the House Freedom Caucus and delivered a 2015 floor speech in opposition to the bank.

“The Export-Import Bank transformed the role of government from a disinterested referee in the economy into a biased actor that uses your taxpayer dollars to tilt the scales in favor of its friends,” he said in the speech.

The bank’s charter lapsed in June 2015, but it was reopened by December of that year. However, it doesn’t have a quorum on the board, with only two of five positions filled. In the absence of a quorum, the bank cannot approve deals worth more than $10 million.

In a joint statement by nine Democratic senators, including Senate Minority Leader Charles Schumer of New York and Sen. Sherrod Brown of Ohio, the ranking member of the banking committee, Democrats said:

So we’re supposed to trust that someone who has extensive history undermining and disparaging the Bank will now support and lead it, even though he doesn’t seem to believe his own words? We need a nominee who truly believes in the mission of the Bank and who wants to support and defend an agency that has a more than 80-year history supporting American jobs and businesses.