I Went to Charlottesville During the Protests. Here’s What I Saw. 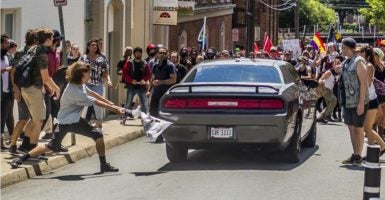 At a protest in Charlottesville, Virginia, an Ohio man associated with white nationalists rammed a crowd and killed a woman. (Photo: Michael Nigro/ZUMA Press/Newscom)

I picked quite a time to go on a weekend trip to Charlottesville.

What was supposed to be a nice getaway with my wife turned into a journey through the eye of a national media storm.

On Saturday, clashes between “Unite the Right” protestors and “anti-fascist” counterprotesters at the foot of a Gen. Robert E. Lee statue—which the City Council had voted to remove from a local park—turned violent.

One woman was killed when an Ohio man allegedly associated with the white nationalist marchers rammed his car through a wave of people. He has been charged with second-degree murder.

The clash between Nazis and leftists in the streets was an ugly and surreal scene one would associate with 1930s Germany, not a sleepy American town in the heart of central Virginia.

A City, and Country, in Shock

The attitude of people around Charlottesville—the silent majority—deserves to be noted. They were almost universally upset, blindsided, and resentful that these groups showed up in their community to drag down its reputation and fight their ideological proxy wars.

Albemarle County, which includes Charlottesville and a few other small towns, is deeply blue in its most populated centers around the University of Virginia and dark red on the outskirts. It’s politically purple. Yet everywhere I went, the attitude toward the protests was similar.

As a thunderstorm rolled in on Saturday evening, a waitress at a restaurant I ate at said, “Let’s hope this washes the day away.”

A local gas station attendant told my wife: “These people from out of town, Nazis, [Black Lives Matter], they’re all hate groups to me.”

Gas station mart attendant to me last night in #Charlottesville: "these people from out of town, Nazis, BLM, they're all hate groups to me."

In the aftermath of the events, most townsfolk walking in the Charlottesville downtown area appeared stunned and shaken. The overall feeling in the area was resentment—certainly not sympathy for any of the groups involved.

It would be a mistake to blow the events in Charlottesville too far out of proportion by linking either side to a mainstream political movement. In the grand scheme of things, it was a small-scale clash between groups who clearly represent an extreme minority in this country.

Even calling the gathering of a couple hundred people a “movement” would be a stretch. The overwhelming media attention given to these fascist, racist groups even before violence took place served as a conduit for the views of this handful of people.

The media’s role in blowing this event out of proportion is lamentable and predictable, but it doesn’t excuse what took place.

What the event does demonstrate is the looming danger of identity politics run amok. This is what is in store if we are consumed by the tribal politics that have destroyed so many other countries.

In June, I wrote about why I think politically incorrect historical monuments—even Confederate ones like the Lee statue in Charlottesville—should stay.

At the time I wrote:

Though many have now jumped to conclude that the events in Charlottesville show the need to give in to the desire of people to tear down statues, this will only serve to strengthen and embolden the radicals—on both sides—to step up their efforts to plunge the nation into constant social unrest and civil war.

In a sense, the “alt-right” and leftist agitators want the same thing. They both seek to redefine the battle over American history in racial and tribal terms in direct opposition to the most basic ideas of our national existence.

Such was the case in the unsightly scene in front of Charlottesville’s Lee statue.

The real individuals whom these statues represent simply ceased to matter.

It was telling that a counterprotest erupted in Washington, D.C., in front of the Albert Pike memorial. Pike had been a Confederate general, but the memorial itself was simply dedicated to his work as a freemason and not his military career.

That fact was irrelevant.

Only the war over identity mattered. Pike must be plucked out and purged.

In a country of 320 million people of stunningly diverse ethnic backgrounds and philosophies, this is a fire bell in the night for complete cultural disintegration. The end result will be uglier than the already sickening events that took place this past weekend.

The Federalist’s publisher, Ben Domenech, rightly noted what this means for the direction of the country: “[I]t is the open conflict of a nation at war with itself over its own character. This war will end badly, no matter how it plays out. And the way this story ends is in demolishing [Thomas Jefferson’s] Monticello brick by brick.”

There is no arc of history bending perpetually on its own toward justice. History is instead a series of twists and turns, influenced by cultural and social forces as well as individuals and communities.

America has never been a perfect nation. It has benefitted from great ideas advanced by imperfect men, and almost miraculously formed a great and good national community out of widely disparate elements.

This history is worth remembering and even celebrating. It shouldn’t be buried because a few evil men have twisted it to serve their causes. Nor should it be used to attack and haunt the living.

I know that Europe’s wonderful, yet something seems to lack:
The Past is too much with her, and the people looking back.
But the glory of the present is to make our future free —
We love our land for what she is and what she is to be.

This is the spirit of our country, and it won’t change because a few thugs wish to turn our most fundamental principles on their heads. We have a duty to repudiate them through a stronger dedication to the founding principles that have made this country great.