These Obama Regulations Make a Strong Case for Tax Reform 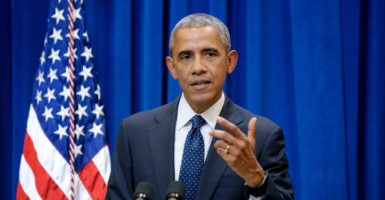 Jacob Lubenow is a member of the Young Leaders Program at The Heritage Foundation.

Congress is pivoting to tax reform, which if done correctly, should replace a list of draconian Obama-era regulations that went to extraordinary lengths to keep American companies from leaving the U.S.

Ironically, the Obama administration ignored the key incentives that pushed companies to try and leave, chief among them being a sky-high corporate tax rate.

One major reason is that U.S. corporate income tax rates are significantly higher than those of our major trading partners. Each year other countries lower their rates while the U.S. corporate tax rate remains stubbornly high.

High corporate taxes make U.S. business uncompetitive relative to their international counterparts. Under the burden of high taxes, they justifiably look for ways to reduce costs.

A common method is an “inversion,” where a U.S. business merges with a foreign competitor, locating their new headquarters in the lower tax country.

For 20 years now, Treasury has handed down regulation after regulation trying to enforce a stiflingly high corporate rate by making it more difficult and expensive for U.S. firms to invert.

The mid-1990s marked the beginning of a wave of inversions, fueled by a growing gulf between the high U.S. tax rate and our peer nations in the Organization for Economic Cooperation and Development.

Since the 1990s, Treasury has been regulating with increasing vigor, yet the number of inversions have continued to rise.

Like playing a game of inversion whack-a-mole, Treasury reacted to new inversion techniques with targeted regulations. While each new rule prohibited a new technique, another inversion would always surface soon after.

Section 385 targeted a practice referred to as “earnings-stripping” and expanded the IRS’ discretion over determining what kind of debt instruments have the potential to erode the tax-base—those instruments used for inversions.

These regulations have served as a Band-Aid in the absence of a true solution. While it may stop the bleeding for a short time, it does not address the cause of the problem.

Unlike the complex layers of regulation, the solution is simple. The U.S. corporate income tax rate is too high.

The U.S. rate of almost 40 percent dwarfs the average among countries in the Organization for Economic Cooperation and Development, which stands at about 22 percent. The U.S. rate is especially problematic when compared to the Irish rate of 12.5 percent.

While ideally there would be no corporate tax, the 15 percent federal rate proposed by President Donald Trump would go a long way toward making America a competitive place for doing business.

The recent lack of announced inversions since the inauguration shows that businesses have taken note of the potential for tax reform.

Congress should peel off the regulatory Band-Aid and address the underlying problem by lowering the corporate tax rate.

The Trump administration has expressed willingness to reassess two of the most burdensome inversion regulations and recently announced a partial delay of the 385 regulations, but that does not go nearly far enough.

Obama-era regulations that trap U.S. businesses and force them to pay globally high tax rates should be removed. While tax reform must remain the focus, Treasury Secretary Steve Mnuchin needs to begin rolling back the previous administration’s inversion regulations now.

Policies that keep businesses from choosing the best business environment, harm American workers, investors, and consumers by trapping corporations in America where they are taxed at some of the highest rates in the world.