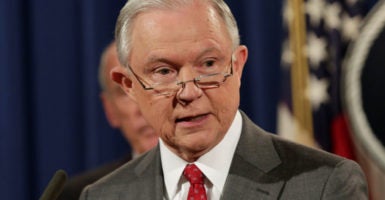 In a letter sent Thursday to Attorney General Jeff Sessions, the four lawmakers request that the Justice Department “repudiate” the program by the end of the month.

We request that your respective departments and agencies issue clear and public formal policy statements repudiating Operation Choke Point and the abuses by financial regulators of the ‘reputation risk’ guidance they developed and promulgated under Operation Choke Point’s auspices.

As reported extensively by The Daily Signal, the Obama Justice Department, under Attorney General Eric Holder, designed Operation Choke Point in 2012 to “attack internet, telemarketing, mail, and other mass market fraud against consumers, by choking fraudsters’ access to the banking system.”

The program works by using federal banking regulators to pressure banks out of doing business with entire industries the government declares to be “high risk,” choking their access to the U.S. banking system.

But instead of simply targeting illegal, fraudulent businesses, the program also affected legal business owners, who complained they were being unfairly denied credit and losing access to third-party payment processors central to running their businesses.

In one case, a large New England bank denied a line of credit to a former police officer who started a gun and tactical business in Monroe, Connecticut, telling him in a voicemail message that the bank “no longer lends to firearms dealers.”

Operation Choke Point had such an adverse impact on the payday lending industry that the Community Financial Services Association of America, which represents some of the nation’s largest short-term lenders, such as Advance America, filed a lawsuit.

The suit named the Federal Deposit Insurance Corp. (FDIC), the government agency responsible for creating a “high risk list” of industries to target. That list grouped categories such as “racist materials” and “credit card schemes” with “firearms” and “tobacco” sales.

In July, the U.S. District Court for the District of Columbia ruled that payday lenders may press forward with their lawsuit against the FDIC and begin the discovery phase. That phase allows the plaintiffs to depose government officials under oath and examine documents and emails related to the program.

“We are thrilled by the court’s order to enter the discovery phase, as this illegal federal program has been unduly harming legal entities for years,” Dennis Shaul, CEO of the Community Financial Services Association, said in a July press release. “It is high time that the government’s unlawful and unjust crusade against lawful and licensed businesses be stopped.”

In April 2016, one of President Barack Obama’s top Justice Department officials behind Operation Choke Point admitted the program had “unintended but collateral consequences” on banks and consumers.

The five Republican House members asked Sessions to respond with a “plan for remedial action” by the end of August.