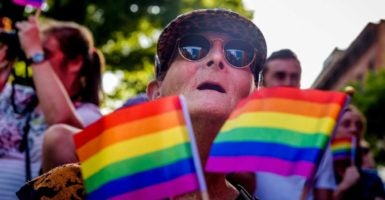 A Colorado high-tech multimillionaire has dumped enormous sums of money into pro-LGBT causes, but has also vowed to take his fight to opponents of his agenda. (Photo: Erik Mcgregor/Zuma Press /Newscom)

A Colorado high-tech multimillionaire backing LGBT activism warns that his foundation will “punish the wicked”—those who oppose the political agenda advanced in the name of lesbian, gay, bisexual, and transgender Americans.

Tim Gill created the Gill Foundation with a $300 million endowment to promote LGBT legislation. The foundation, based in Denver, has worked against religious freedom measures since 1994.

“It’s the religious right that decided to make marriage an issue. They worked tirelessly on it for decades, and they lost,” Gill said in a recent interview in Rolling Stone magazine.

Recently, he fought against the proposed Religious Freedom Restoration Act, or RFRA, in Georgia.

The measure would have prevented the government from intervention in religious practice without a compelling governmental interest.

To defeat the legislation, Gill founded Georgia Prospers, which orchestrated protests in the state. Georgia Prospers also drafted an opposition petition for major Georgia businesses, such as Coca-Cola, to protest the RFRA.

Gill’s involvement started with an amendment to the Colorado Constitution, known commonly as Initiative 2, according to an interview he did at Yale University. Initiative 2, which was passed but later overturned in court, proposed that no state law could assign protected status for sexual orientation.

“My assistant’s assistant at Quark had actually voted in favor of [passing the amendment],” Gill said. “I thought, ‘She says I should be able to be fired for being gay; that sexual orientation shouldn’t protect me.’ I thought, ‘Maybe I should fire her.’”

Instead, he donated $1 million to the effort to overturn the amendment.

“When I look around the country, I see people that are victims of hate crimes,” Gill said in a promotional video for his foundation, explaining his activism.

Gill’s political efforts are funded by his success in the tech industry. Raised in a Republican family, he made his fortune as a programmer.

Gill sold his stake in Quark, his software startup, for $500 million in 1992, Rolling Stone noted. He then moved into LGBT activism full time and has since shifted 60 percent of his assets into an endowment for the Gill Foundation.