Freedom Fest Shows the Liberty Movement Is Alive and Well 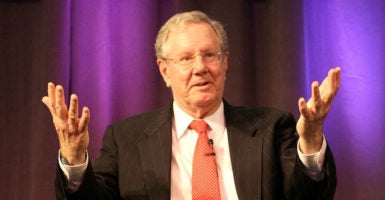 Steve Forbes appeared at Freedom Fest, where he discussed the virtues of capitalism and celebrated his 70th birthday. (Photo: Bill Ingram/Zuma Press/Newscom)

Following the off-key but spirited rendition of “Happy Birthday, Dear Steve,” Forbes thanked the crowd for their best wishes on his 70th birthday and proceeded to extoll the many virtues of capitalism. He praised capitalism for being entrepreneurial, creative, innovative, and “a force for good.” (He is no Randian apostle of radical egoism.)

Firmly pro-life as well as being a libertarian, Forbes remarked: “Our founders understood well: First life, then liberty, then the pursuit of happiness.”

Like F. A. Hayek, Forbes acknowledges the importance of traditional morality.

“Free markets are moral,” Forbes once told an interviewer, “because they’re fundamentally about meeting the real-world needs and wants of others. … Economic freedom is moral because it does the best job of any system in channeling our self-interest into positive, productive activities that benefit all of society.”

The Steve Forbes’ celebration was an apt ending to Freedom Fest, which was smoothly organized as usual by the economist and classical liberal Mark Skousen. He builds a bigger tent each year, both for libertarians and for conservatives like myself who are curious about the current mindset of our liberty-loving colleagues.

This year, we were treated to far fewer predictions of an imminent great depression and a stock market crash.

Instead, we heard ringmaster Skousen point out that “we were in the second-longest bull market in history,” that capitalism had “enhanced the lives of all peoples” from China to Chile, and that under President Donald Trump the national debt was slowing.

He warned, however, that if Trump did not get tax reform—including a tax cut—through Congress, he would be “through politically.”

Sen. Mike Lee, R-Utah, and Reps. Justin Amash, R-Mich.; Andy Biggs, R-Ariz.; and Thomas Massie, R-Ky., offered mostly bad, but some good, news from Washington, D.C. They described their place of business as a very deep swamp that is exceedingly difficult to drain, and their congressional colleagues as “zombies.”

The “good” news, they said, was that even “the evil people” do not have a plan and are just repeating mechanically what they have been doing for years. “We can use that [automatic pilot] to our advantage.”

They praised Trump for his anti-regulation campaign, pointing out that he has cancelled 15 regulations for every new regulation issued.

Trump’s enthusiastic use of executive power has had an unexpected consequence—some Democrats are calling for more state, local, and individual action to counter the president’s “imperial” presidency. As a result, conservative Republicans are reaching out to liberal Democrats and suggesting ways to work together to reduce the role of the federal government.

Lee and his congressional allies impressed the conferees (and myself) with their “happy warrior” attitude, confident they were on the “right” side and determined to make “our principles attractive to all.” We will win in the long run, they said, because “liberty is in America’s DNA.”

Socialism in the person of Sens. Bernie Sanders, I-Vt., and Elizabeth Warren, D-Mass., may be beguiling some Americans, but the libertarians gathered at Freedom Fest knew their Tocqueville and were pleased to quote what the French political philosopher said in his classic work “Democracy in America”: