Yes, the Left Really Is a Greater Threat to the West Than Russia 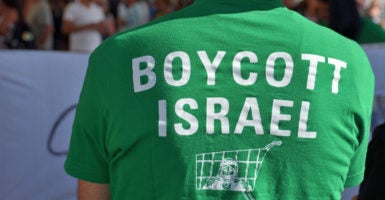 The tweet reads, “The news media in the West pose a far greater danger to Western civilization than Russia does.”

The news media in the West pose a far greater danger to Western civilization than Russia does.

Since he wrote the column as a “Dear Dennis” letter to me, I will respond in kind.

Dear Bret: I’ll try to respond to the most salient arguments you made. I’ll begin with one of the most troubling.

You wrote: “Wiser conservatives—and I count you among them, Dennis—also know that when we speak of ‘the West,’ what we’re talking about is a particular strain within it. Marx and Lenin, after all, are also part of the Western tradition, as are Heidegger and Hitler.”

I was taken aback that such a serious thinker could write that nihilist communists and nihilist Nazis are all “part of the Western tradition.”

That’s what the vast majority of professors in the social sciences teach: There’s nothing morally superior about Western civilization—it’s as much about Hitler and Lenin as it is about Moses and Thomas Jefferson.

And, anyway, Moses never existed and Jefferson was a slaveholding rapist. Among those professors’ students are virtually all those who dominate the Western news media.

Am I wrong? Do you think your colleagues at the Times or The Washington Post or Le Monde or BBC believe in the moral superiority of the West?

Of course they don’t. Most believe in multiculturalism—the doctrine that all cultures are equal—and it is therefore nothing more than white racism to hold that Western civilization is superior.

Didn’t nearly all of your (nonconservative) colleagues who commented on President Donald Trump’s speech in Warsaw call it a dog whistle to white supremacists?

I am surprised that anyone—especially you—thinks Vladimir Putin’s Russia poses a greater threat to the survival of Western civilization than the Western left. No external force can destroy a civilization as effectively as an internal one—especially one as powerful and wealthy as the West.

I was also stunned by your saying, “I’m not sure that Justin Trudeau declaring there is ‘no core identity, no mainstream in Canada’ counts as a Spenglerian moment in the story of Western decline.”

The prime minister of Canada announces with pride that his country has no core identity and you don’t think that counts as an example of a declining civilization?

And here’s another upsetting sentence: “To suggest that Vladimir Putin is a distant nuisance but Maggie Haberman or David Sanger is an existential threat to our civilization isn’t seeing things plain, to put it mildly.”

The reason I found that troubling is I never cited Haberman or Sanger, and you well know that no generalization includes every possible example—that’s what makes it a generalization.

Despite the fact that neither my tweet nor my column said a word about Trump, you devoted almost half your column to denouncing the president.

Yet, as I wrote in the column, my tweet would have been just as accurate had I sent it out during former President Barack Obama’s administration or Hillary Clinton’s, if she were president.

Bret, to your great credit, you are a lonely voice of strong support for Israel at your newspaper (your readers should see the videos on the Middle East you made for Prager University; they have 8 million views for good reason).

Doesn’t the almost uniform hostility toward Israel in the media and academia trouble you? Does it trouble you that most Democrats in America hold a negative view of Israel?

That Jewish students at many American, not to mention European, universities fear expressing support for Israel or just wearing a yarmulke on campus? That so many young American Jews, influenced by the media and their professors, loathe Israel?

I am certain all of that greatly troubles you. Is any of that Putin’s doing? Or is it all the result of the media and academia?

You mentioned that you will be sending me a birthday gift, a book about Putin’s Russia, “Nothing Is True and Everything Is Possible” by Peter Pomerantsev. I promise to read it.

And I request a promise in return: Read the book I am sending you, “The Strange Death of Europe” by the eminent British thinker Douglas Murray.

The book describes Europe’s suicide at the hands of its progressive elites—in particular, its multiculturalism-affirming political leaders and mendacious news media. To the best of my recollection, in describing the death of European civilization, Murray doesn’t mention Putin once.

(Regarding the mendacious media, read the report published this week in Germany about the dishonesty in the German media, which routinely substitutes left-wing opinion for facts in reporting the immigrant crisis in Germany.)

Perhaps the most troubling part of your response was your penultimate line: “Don’t be a hater, Dennis.”

Where did that come from? You cite not a single hateful word in my column—because there are none to cite. And “hater” has become the all-purpose left-wing epithet to dismiss all conservatives.

Why would my friend Bret Stephens use it?