Why This European Leader Is Embracing the Trump Presidency 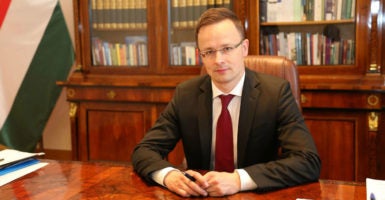 Hungary’s foreign minister came to Washington seeking something from the Trump administration that his government is being denied by the European Union—sympathy for its sovereign right to make its own internal decisions and laws.

He deserves a hearing.

Such a return to basic relations among nation-states—let alone treaty allies and friends—is also a radical departure from the previous administration. Foreign Minister Péter Szijjártó said the Obama administration had failed to respect Budapest’s right to self-determination.

In a July 14 speech at The Heritage Foundation, Szijjártó shared an anecdote of a meeting he had in 2014 with Assistant Secretary of State Victoria Nuland. The two were meeting because then-Secretary of State John Kerry refused to meet Szijjártó.

In the meeting, Nuland “threw” a piece of paper at Szijjártó with a list of requirements that Hungary would have to meet before the administration would formally meet with the Hungarian government.

These efforts to interfere in Hungary’s domestic politics only served to alienate the Hungarian government, as is the case now with the EU.

What has Hungary done to deserve all this?

Its democratically elected prime minister, Viktor Orban, has fought for Hungary’s right to self-govern. He has emphatically opposed the EU’s overly permissive migrant policy, calling it “self-destructive and naïve.”

More importantly, Orban has led the fight against the influence that left-wing billionaire George Soros wields in Hungarian domestic affairs. He’s done that in several ways, but mainly by requiring the Central European University in Budapest, a university set up by Soros, to comply with current Hungarian law.

For daring to do all that, Orban has been vilified in the mainstream media and formally rebuked by the EU.

Most recently, the European Commission declared that the law passed by Hungary’s parliament that is being used against the university is incompatible with “the right of academic freedom, the right to education, and the freedom to conduct a business.”

Brussels declared that if Hungary did not respond to this declaration within one month, Hungary would face sanctions and could even lose its voting rights.

Despite Brussels’ ham-handedness, Szijjártó said Hungary will continue to press for deep reform in the EU.

“There is one consensus that is shared by everyone—that we want a strong European Union,” he said. “The major debate is about how to get there.”

Szijjártó’s five goals for the EU going forward are noteworthy in that they represent an attempt to turn the institution into less of a hidebound, anti-growth body:

As Szijjártó describes it—and as is increasingly apparent to those studying the issue—EU nations are split on the question of sovereignty.

Some member states advocate increased centralization of power at the EU headquarters in Brussels as the best path to European prosperity. Others, like Hungary, argue that Europe as a whole will be strongest with strong, sovereign member states. Brexit is illustrative of this centralization vs. sovereignty debate. The U.K. proved unwilling to continue ceding its rights as a sovereign nation to centralized bureaucrats in Brussels.

Though some in Europe blame Brexit for the EU’s current political uncertainty, Szijjártó argues that these people have it backward:

There are good arguments behind Hungary’s pro-sovereignty, anti-centralization stance. Americans can approve of it, as it both aligns with American principles and protects American interests. Stronger European countries mean stronger allies for the U.S.

It would also advance the idea that pursuing one’s national interest is morally legitimate—a view that has all too often been derided.

Before Trump used it, “if you thought or said that your country is the first for you, the interests of your nation is first for you, you had to feel ashamed, and you were considered as a dictator, as a nationalist, as in retrograde, as not modern enough and not internationalist enough, not globalist enough.”

Now, according to Szijjártó, this has changed:

Now we are happy to be free to say that for us Hungary is first. We always acknowledge the rights of nations to put themselves in the first place when it comes to interests, and now we are very happy that the leader of the number one superpower in the world said the same.

Szijjártó sees in Trump’s pro-sovereignty attitude a level of respect that was lacking in the Obama administration. According to Szijjártó: “Mutual respect was something that was really emphasized in the speech of your president in Warsaw, and I think that’s a game changer.”