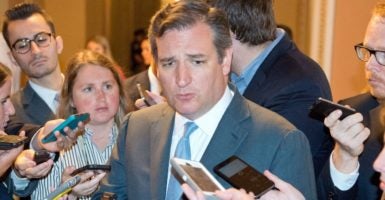 "You can't have your central promise for seven years be we'll repeal Obamacare, and then you show up and vote not even to take up the bill to consider repealing Obamacare," Sen. Ted Cruz, R-Texas, told Fox News. (Photo: Ron Sachs/dpa/picture-alliance/Newscom)

“Now is the time to act after eight years of promising to repeal Obamacare,” said Family Research Council President Tony Perkins during a conference call with reporters, urging Republicans to move forward with a proposed measure that would repeal the Affordable Care Act.

“If Republicans cannot repeal Obamacare, they need to call hospice care, because their majority is not long in this world.”

The calls for repeal came after the Senate’s health care bill failed to garner enough votes to pass. The bill would have rewritten the Affordable Care Act, passed in 2010 under President Barack Obama.

Senate Majority Leader Mitch McConnell, Bozell said, should hold the GOP accountable for delivering repeal. Without that delivery, he cautioned, Republicans will lose the majority they currently have, “absolutely guaranteed.”

“Voters will stay home, they’ll have no reason to vote.”

The Media Research Center joined other groups in offering support to senators who vote to proceed with repeal—and repercussions to those who don’t.

“Voting no is not an option,” Club for Growth President David McIntosh said.

“We’re not frustrated lobbyists,” said McIntosh. “The frustration is that it looks like [Senate Republicans] are about to jump off a cliff and really betray the voters who put them into office.”