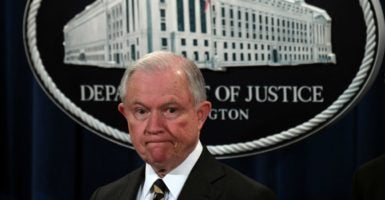 Attorney General Jeff Sessions announced a new directive strengthening the government’s ability to seize property of suspected criminals that clashes with reforms some conservatives have advocated.

“As any of these law enforcement partners will tell you and as President [Donald] Trump knows well, civil asset forfeiture is a key tool that helps law enforcement defund organized crime, take back ill-gotten gains, and prevent new crimes from being committed, and it weakens the criminals and the cartels,” Sessions told law enforcement groups Wednesday in Washington.

Civil asset forfeiture is when a law enforcement agency can temporarily take the property or cash it suspects was involved in a crime in some cases without bringing formal charges against the owner of the property, which has prompted concerns among those on both sides of the aisle regarding property and due process rights.

“Even more importantly, it helps return property to the victims of crime. Civil asset forfeiture takes the material support of the criminals and instead makes it the material support of law enforcement, funding priorities like new vehicles, bulletproof vests, opioid overdose reversal kits, and better training. In departments across this country, funds that were once used to take lives are now being used to save lives,” the attorney general added.

But Sen. Mike Lee, R-Utah, said the Justice Department is moving in the wrong direction.

“Back in May I encouraged the Department of Justice to review its policies on civil asset forfeiture in light of increasing indications from the Supreme Court that this practice is constitutionally suspect,” Lee said in a statement. “Instead of revising forfeiture practices in a manner to better protect Americans’ due process rights, the DOJ seems determined to lose in court before it changes its policies for the better.”

On May 31, Lee and a bipartisan group of senators sent a letter to the Justice Department calling for additional reforms to civil asset forfeiture, before the Supreme Court steps in.

State and local law enforcement—in some cases hamstrung by state laws that strongly back property rights—can recruit federal support to seize property of criminal suspect before a conviction, said Jason Snead, legal policy analyst with The Heritage Foundation. For instance, if a suspect was carrying a large amount of cash that local law enforcement perceived to be potential drug money, the federal Drug Enforcement Administration could take the cash.

Snead noted that many conservatives and libertarians supported changes that Obama administration Attorney General Eric Holder made, which largely curtailed the program of cooperating with local law enforcement in 2015.

“This is an unfortunate step in the wrong direction, and it’s out of sync with what lawmakers in Congress and state legislatures are doing,” Snead told The Daily Signal. “Already, 24 states had rolled back or abolished civil assets forfeiture. There are proposals in Congress to reform the measure. The public believes there should be checks in place.”

During his remarks Wednesday, Sessions said the Justice Department intends on protecting the property rights of law-abiding citizens. He said the federal government will not adopt seized property unless the state or local agency involved provides information demonstrating that the seizure was justified by probable cause.

He noted that he worked with Democrats, such as current Senate Minority Leader Charles Schumer, D-N.Y., to improve civil asset forfeiture laws in the past.

“We required probable cause for the seizure of property,” Sessions said. “And we raised the burden on the government, who has the initial burden in all of these cases, to the same preponderance of the evidence standard used in all civil cases. In addition, if the government lost the case, then the government pays attorneys’ fees. I believe those were good reforms that strengthened the program.”