Legal Experts Weigh in on Trump’s Right to Be Riled at Sessions, DOJ 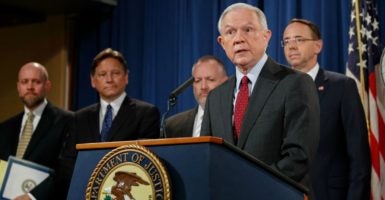 Jeff Sessions will likely continue to lead the Department of Justice, despite the public clash between President Donald Trump and his choice for attorney general.

“Sessions should un-recuse himself and get rid of Mueller,” @TomFitton says.

But Trump’s frustration with the direction of the Russian probe and the special prosecutor are understandable, said Tom Fitton, president of Judicial Watch, a government watchdog group.

“Sessions should un-recuse himself and get rid of [special counsel Robert] Mueller,” Fitton told The Daily Signal. “This is a political effort to jail the president and his family because people don’t like him.”

Trump told The New York Times that he regrets tapping Sessions for attorney general since Sessions recused himself from the investigation into Russian interference into the 2016 presidential campaign. Trump called Sessions’ decision to recuse himself from the case “unfair to the president.”

It was the recusal that eventually led to the Justice Department appointment of Mueller, who has reportedly expanded the investigation beyond Russia’s role in the 2016 presidential campaign and into Trump’s past business dealings. Furthermore, Mueller has staffed up with Democratic donors.

“To be fair to Sessions, I think he believed he was recusing himself from a very limited set of circumstances,” Fitton said. “He was a bit naïve because that is not the way to approach it. You can’t have an attorney general that is unable to manage the largest case known to the public that is going on in the Justice Department. Now they have moved beyond Russia and are investigating everything.”

Trump, in an interview with the Times, said:

Jeff Sessions takes the job, gets into the job, recuses himself, which frankly I think is very unfair to the president … How do you take a job and then recuse yourself? If he would have recused himself before the job, I would have said, ‘Thanks, Jeff, but I’m not going to take you.’ It’s extremely unfair—and that’s a mild word—to the president.

During a press conference Thursday where Sessions wanted to talk cybersecurity, the only questions were about Trump’s comment. The attorney general responded, “I plan to continue to do so as long as that is appropriate.”

“As the president said yesterday, he was disappointed in Attorney General Sessions’ decision to recuse himself. But clearly he has confidence in him or he would not be attorney general.”

Pressed further if Trump wants Sessions to resign, Sanders responded, “I think you know this president well enough to know that if he wanted somebody to take an action, he would make that quite clear.”

Sessions had little choice but to recuse himself in the matter, argued Matthew Whitaker, a former U.S. attorney for the Southern District of Iowa.

“My understanding of the DOJ policy is that he needed to recuse himself from the investigation because he was part of the campaign,” Whitaker told The Daily Signal.

Whitaker, president of the Foundation for Accountability and Civic Trust, a government watchdog group, said Trump’s comments shouldn’t interfere with the Russian investigation.

“This just confirms rumors we’ve been hearing for the last several months,” he said. “The president just had a forum and a venue to share his feelings. It’s unfortunate, but it won’t have any bearing on the important work of the DOJ. The remarks will pass.”

During his March announcement, Sessions said:

However, in lieu of a finite charge, Sessions could have delayed recusal and would be on solid legal ground, contends Ken Boehm, chairman of the National Legal and Policy Center, a government watchdog group.

“Jeff Sessions could have said to Trump, ‘If asked, I would recuse myself,” Boehm told The Daily Signal. “I think the world of Jeff Sessions. I think he’s a good man. But, if you look at every other incident, people in positions at Justice in the past administration wouldn’t do it because they would fear a fishing expedition. Before Sessions recused himself, he should have called for an actual crime, a statute. He would have been on firm legal ground.”