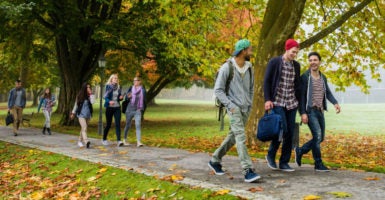 Campus speech has come under heightened scrutiny and even suppression in recent years. (Photo: iStock Photos)

In recent days, college students have shouted down, pepper-sprayed, punched, and otherwise shut down the campus guests whose ideas they considered offensive.

The most prominent recent cases have included Milo Yiannopoulos (University of California, Berkeley), Charles Murray (Middlebury College), and Heather Mac Donald (Claremont McKenna College), but a number of institutions have disinvited scheduled speakers and disciplined students or professors for expressing their ideas.

The College of William & Mary, the University of Colorado, and DePaul University went so far as to discipline students who criticized affirmative action. The University of Kansas even disciplined a professor for criticizing the National Rifle Association.

Unless we want this depressing trend to continue indefinitely until free speech has been shuttered—not only on university campuses, but in coffee shops, churches, and public squares—Americans must make anew the case for free speech.

Many of this generation’s college students are skeptical of legal precedents establishing free speech. They have been taught, from a very young age, to discourage bullying and to protect others against intolerant or offensive speech.

Little do they know that the protection of free speech actually helps the very people who have been marginalized or offended by ensuring that those people can speak freely against the offense.

For many college students, though, “free speech” is a very abstract right, one that many of them lack the motivation to defend.

They are not convinced, and we must convince them.

We can’t merely say, “Free speech is necessary in a democratic society. Grow up and get over it, just like we did when we were in college.”

For one, some instances of public speech are genuinely hateful and therefore deeply disturbing, and we should not make light of the negative psychological impact of offensive and hateful speech. Moreover, a condescending reprimand serves to alienate rather than to persuade.

How to Make the Case on Campus

So, how do we make the case?

Instead of reprimanding students or merely citing the Constitution, we should also try to persuade them by making a practical argument about the negative consequences of restricting free speech on college campuses.

1. It defeats the purpose of going to college in the first place.

As the University of Chicago put it in a statement defending free speech: “Our commitment to academic freedom means that we do not support so-called ‘trigger warnings,’ we do not cancel invited speakers because their topics might prove controversial, and we do not condone the creation of intellectual ‘safe spaces’ where individuals retreat from ideas and perspectives at odds with their own.”

One of the purposes of higher education is to welcome students of all backgrounds and teach them how to discuss and debate a wide variety of ideas. The restriction of free speech undermines that purpose.

2. It erodes the free and democratic nature of American society.

The purpose of a college education isn’t to reaffirm students’ beliefs, it is to challenge, expand, and refine them—and to send students into the world with minds that are open and questioning, not closed and self-righteous. This helps young people discover their talents and prepare them for citizenship in a diverse, pluralistic democratic society. American society is not always a comfortable place to be; the college campus shouldn’t be, either.

3. It encourages hypocrisy and undermines our ability to persuade.

If free speech is suppressed, you won’t know who people really are. People who hold hateful or offensive views will hide who they are, and you’ll never be able to persuade them of the wrongness of their views.

4. It ignores the fact that social progress often depends on free speech.

Many of the ideas that most Americans cherish—such as racial and gender equality—were once considered offensive. But they are no longer considered offensive precisely because courageous American citizens were allowed to display the merits of those ideas in public discussion and debate.

5. It tilts our society in an authoritarian direction.

First, if universities are free today to ban unintentionally offensive racial expressions, they will be free tomorrow to ban any sort of critique or evaluation of social groupings. Second, ideological winds tend to change direction. Students who are eager to suppress other people’s speech may one day find their own speech being suppressed.

For Americans who are Christians, there is yet another reason to promote free speech: We want to be free to preach the Christian gospel, even though many people find Christianity offensive and discriminatory.

And if we do not stem the tide of free speech restrictions, we might find ourselves in a situation one day where our nation’s universities and public squares keep us from speaking about that which is most precious to us.

That is something upon which Christian Americans of all stripes should be able to agree.