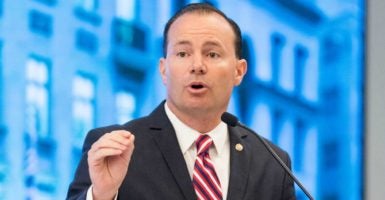 Facebook can’t replace the Little League, and neither can the federal government, according to Sen. Mike Lee.

In a speech at the American Enterprise Institute, Lee, a Republican, hailed the power of local communities and their institutions—families, churches, and groups like the Little League—to restore democratic life in America.

“The beauty of localism,” the Utah senator said, “[is that] it still offers our country the best way forward.”

Lee, vice chairman of the Joint Economic Committee, spoke at AEI to discuss new findings of the Social Capital Project, a “multi-year research effort that [investigates] the evolving nature, quality, and importance of our associational life,” per Lee’s website.

These findings, which illustrate a fracturing of civic life in America, are detailed in a report, published in May, called “What We Do Together: The State of Associational Life in America.”

Citing Alexis de Tocqueville’s characterization of civil society as a bedrock of American flourishing, Lee warned against the growing trend toward mass movements that cause Americans to seek fellowship in government programs and social networks.

“Churches and little leagues can’t be replaced by glowing rectangles in our pockets,”  Lee said. “Community is the stage on which we perform the most important roles of our lives.”

The civil society report found a shift in the structure of the American family. Fewer Americans get married, some because they fear failing a welfare means test. Fewer have children, and those who do end up as single parents, to the point, Lee said, that “a majority of American children can now expect to live with just one parent.”

Religion and civic associations also no longer form the nucleus of community, according to Lee.

As detailed in the report, church attendance and trust in organized religion have dropped “sharply” since the 1970s, as has participation in secular groups like the Rotary. Fraternal societies, which formerly offered private charity and aid, now find themselves supplanted by the welfare state.

“Robbed of purpose by an institution that they can’t compete with, these civic groups start to wither, leaving behind an empty public square,” Lee said.

Because they are severed from institutions meant to offer “meaning and purpose,” Americans now pursue alternative community structures.

Mass movements, such as protests and campus activism, aimed at solving national problems offer feelings associated with traditional community, but are ill-suited to address everyday problems, according to Lee.

“They instill those feelings on the cheap,” Lee said. “They’re no substitute for the hard work of building real, actual relationships.”

Lee and the Social Capital Project promote a return to these relationships and the local communities in which they are formed.

The federal government can empower civil institutions in part by allowing states to develop localized solutions that further flourishing, according to Lee.

“Communities require good manners,” Lee said. “We should not discount the sheer civilizing effect that proximity tends to have.”

In proximity to one another, Lee said, again citing Tocqueville, Americans can find true esteem and dignity.

“We need to turn our gaze from Washington, D.C., to where we came from,” Lee said.