Repealing This Obamacare Tax Would Signal That Tax Reform Is Alive 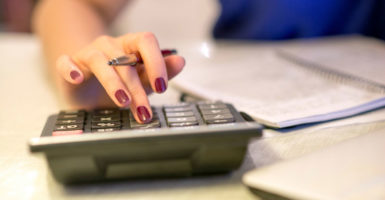 The Senate is seriously considering keeping Obamacare’s 3.8 percent net investment income tax as part of its most recent repeal and replace proposal.

Rather than falling back on the simple story that the tax will just be paid by the rich, this is an important opportunity for the Senate to explain that taxes on investment slow economic expansion and wage growth, harming all Americans.

Understanding and explaining this crucial link between properly updating the tax code and real wage growth is essential for upcoming tax reform debates. The Senate should demonstrate that it is indeed committed to true tax reform by repealing the Obamacare investment tax.

A key goal of tax reform must be economic growth, and the most crucial component of that effort is lowering the after-tax cost of investment.

The U.S. economy’s slow growth can be remedied by properly updating our 30-year-old tax code, which has accumulated new and distortionary appendages, like the Obamacare taxes over the years.

Businesses invest so that their employees can be more productive. More productive employees earn higher wages, produce more output, and businesses can hire additional workers as profit and demand increase.

The opposite is also true: High tax rates on investment slow the economy because investment is an important driver of growth.

When taxes on investment income go up, the incentive for a business to invest goes down.

Less new investment in the U.S. means fewer people are hired, and real wages rise more slowly, if at all. Employees who are not able to work with better equipment and information will be less productive and won’t be paid a higher wage.

The Obamacare investment tax has harmed workers by raising the cost of investment.

Critics have succeeded in terming the 3.8 percent investment tax repeal a “tax cut for the rich.” Even prominent conservatives seem to be OK using taxes on investment income to pay for health care reform.

What Republicans and Democrats both miss is that even if a rich person like Warren Buffett writes the check, economics dictates that he will charge at least some part of that tax to someone else—most likely to American workers.

At first pass, it does seem that the tax falls on the rich—the investment tax only applies to those earning $200,000 (for single taxpayers). However, the person who pays the tax to the government is not necessarily the same person who bears the economic burden of the tax.

In the case of taxes that increase the cost of investment, the economic burden is always shared by workers. Workers share the cost of the tax through lower wages and fewer jobs because of unrealized investment.

Taxes that discourage additional investment don’t just hurt the owners of capital. They hurt the people those investments would have employed.

The type of fundamental tax reform that can grow the economy by as much 10 percent over 10 years must lower tax rates on investment. Current federal tax rates on the next or “marginal” investment can exceed 40 percent, and can be more than 10 percentage points higher in states with high taxes.

Repealing the Obamacare investment tax will help reduce that 40 percent rate, but the true reform needs to come as part of updating the entire tax code.

Lowering the tax rate on capital gains and dividend investment income to 16.5 percent is one of the most important non-business reforms in the House tax reform blueprint.

If the Senate is not able to reform this important, but relatively small, penalty to investment, how will it find the political backbone to reform the rest of the tax code?

Standing up to political pressure can be hard. Last month, the House of Representatives voted to expand tax credits for nuclear energy, signaling it may not be serious about true tax reform by further institutionalizing tax subsidies for special interests.

The Senate now has the opportunity to demonstrate to the American people that Congress is indeed committed to tax reform by both repealing the Obamacare investment tax, and also explaining to those who demagogue the repeal as “just a tax cut for the rich” how they are mistaken.

Lowering tax rates on investment is a boon for all American workers.