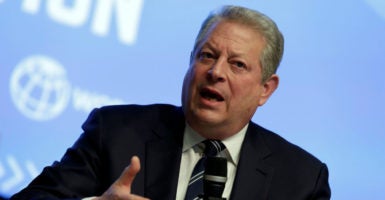 “The abolition of slavery, woman’s suffrage … and more recently the gay rights movement,” former Vice President Al Gore says about the importance of staying ahead of the curve on environmental issues. (Photo: Yuri Gripas/Reuters/Newscom)

Former Vice President Al Gore compared the fight to end man-made global warming to the abolishment of slavery and the push for gay marriage.

“The abolition of slavery, woman’s suffrage … and more recently the gay rights movement,” Gore said Thursday about the importance of staying ahead of the curve on environmental issues.

The mission to reduce the Earth’s temperature is on par with other “great moral causes” that have improved humanity, he told an audience at the EcoCity World Summit in Australia.

Gore has made similar comments in the past. He told reporters in 2013 that so-called climate change “deniers” are like alcoholic fathers who act belligerently when someone mentions the issue.

“It’s like a family with an alcoholic father who flies into a rage every time a subject is mentioned and so everybody avoids the elephant in the room to keep the peace,” he said at the time. The former vice president is in Australia promoting “An Inconvenient Sequel,” the follow-up to his 2006 “An Inconvenient Truth.”

“Unless we take drastic measures, the world would reach a point of no return within 10 years,” which Gore said in the film would precipitate a “true planetary crisis” due to man-made global warming.

The film is frequently credited for popularizing the global warming debate. It emboldened environmentalists and perhaps laid the groundwork for the Obama administration’s failed effort to pass cap-and-trade legislation in 2009.