Trump Well Behind in Winning Senate Confirmation of Appointees 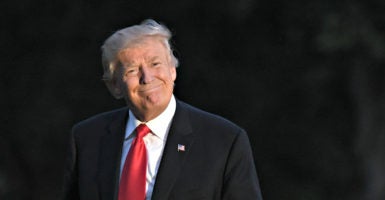 President Donald Trump, returning from his European trip July 8, is all smiles as he walks on the South Lawn of the White House. (Photo: Olivier Douliery/CNP/Newscom)

The White House is turning up the heat on Senate Democrats for using delaying tactics to block President Donald Trump’s executive branch nominees, even as Trump trails recent presidents in the number of appointments so far.

The president so far has nominated 197 persons for administration posts, of which 48 have won Senate confirmation.

Trump blasted Democrats in a tweet Tuesday for procedural tactics in the Senate, which have included requiring cloture—a measure to end debate before a vote—and boycotting confirmation hearings to prevent a required quorum.

The Senate Democrats have only confirmed 48 of 197 Presidential Nominees. They can’t win so all they do is slow things down & obstruct!

Trump is well behind his most recent predecessors not only in confirmations by the Senate, but also in making nominations to build his administration.

By July 11, 2009, in his first year in office, President Barack Obama—with a Senate controlled by his party—had made 356 nominations, 200 of which had been confirmed, according to the Center for Presidential Transition, a project of the Partnership for Public Service. By this point in 2001, his first term, President George W. Bush—with a Democrat-controlled Senate—had made 296 nominations, 149 of which were confirmed.

President Bill Clinton—also with a Democrat-controlled Senate—had made 256 nominations by this point in 1993, and had 196 confirmations.

His predecessor, George H.W. Bush, had made 243 nominations at this point in 1989, of which 144 had won Senate confirmation.

Three decades later, Senate Democrats are gumming up the process by requiring cloture filings for most of Trump’s nominees. Cloture means that before taking a vote on a nominee, the Senate must have a two-day waiting period and 30 hours of debate. The rule allows the Senate minority, in this case the Democrats, to halt other business.

The blame certainly can be spread around, said Robert Moffit, a senior fellow in health policy at The Heritage Foundation who has watched Capitol Hill for decades.

“The Senate delay is pure obstruction and a disservice to the American people,” Moffit told The Daily Signal. “Advise and consent is not simply obstructing the president’s team’s ability to carry out his agenda. This directly obstructs the democratic process. The country elects presidents.”

“The sluggish pace to fill sub-Cabinet posts has not been the fault of Democrats, but the fault of a presidential personnel operation,” he said.

Political appointees serve an integral role as leaders and decision-makers in government, said Max Stier, president and CEO of the Partnership for Public Service, a nonpartisan research organization.

“President Trump has picked up the pace on nominations, but there are hundreds of vitally important positions left to fill, including director of the U.S. Census Bureau, assistant secretary for East Asian and Pacific Affairs and assistant secretary for Immigration and Customs Enforcement (ICE),” Stier told The Daily Signal in a prepared statement.

“It is essential that the president identifies top talent to fill these leadership positions and that the Senate consider these nominees quickly so that critical decisions can be made across government,” he said.

Senate Majority Leader Mitch McConnell said Tuesday that after completing work on a health care bill to replace Obamacare, the Senate will turn to a defense spending bill and “the backlog of critical nominations that have been mindlessly stalled by Democrats.”

“In order to provide more time to complete action on important legislative items and process nominees that have been stalled by a lack of cooperation from our friends across the aisle, the Senate will delay the start of the August recess until the third week of August,” McConnell, R-Ky., said.

While more than 90 percent of the previous administration’s nominations were confirmed by a voice vote, Democrats in the Senate have allowed only approximately 10 percent of President Trump’s nominees to be voted on in that way.

“No administration in recent memory has been slower in sending nominations to the Senate,” Schumer said in his remarks Monday. “We can’t go forward until that happens. That’s almost unprecedented in its degree. Time and time again they’ve stalled on providing committees the information needed.”

He added: “It’s typical of the Trump administration: Do something wrong and blame someone else for your problem.”

The White House listed these as some of the more noncontroversial nominees who are being held up by Senate Democrats:

A total of 16 nominees are for defense-related posts, Marc Short, White House director of legislative affairs, told reporters during the Monday briefing.

“I believe that the Democrat obstruction is jeopardizing national security,” Short said.