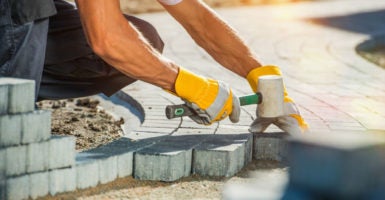 Nearly 90 percent of Americans agree that “able-bodied adults" receiving welfare benefits should be required to work or prepare for work in order to receive those benefits. (Photo: iStock Photos)

Most Americans believe able-bodied adults receiving welfare should be required to at least seriously look for work.

A new piece of legislation in the House promises to advance that majority view in federal law.

H.R. 2996 would establish the principle that welfare assistance should not be a one-way handout. Assistance should definitely be given to those in need, but recipients should be required in exchange to take steps to support themselves.

SNAP already has nominal work requirements for non-elderly, able-bodied adults without dependent children. However, under current law, states can request statewide or, more commonly, countywide waivers from these requirements based on high unemployment rates or job shortages.

Under the waiver provision, most low-income counties are exempted from the SNAP work requirements, and most low-income able-bodied adults without dependent children are not subject to them.

The caseload for such individuals more than doubled over the past decade, rising from 1.9 million in 2008 to 4.2 million today. Food stamp benefits for able-bodied adults without dependent children cost taxpayers approximately $8.5 billion per year.

To strengthen the work requirement for this category of food stamp recipients, H.R. 2996 echoes a section of the Welfare Reform and Upward Mobility Act, which was reintroduced in early June by Sen. Mike Lee, R-Utah, and Rep. Jim Jordan, R-Ohio. Among other reforms, this legislation would eliminate statewide or partial waivers from SNAP work requirements.

In effect, the bill would establish a near-universal requirement for able-bodied adults without dependent children to either work or prepare for work as a condition of receiving food stamp assistance.

Although critics decry such food stamp reform as a “horror,” in reality, the principle of reciprocity between welfare recipients and society has broad public support.

Nearly 90 percent of the public agree that “able-bodied adults that receive cash, food, housing, and medical assistance should be required to work or prepare for work as a condition of receiving those government benefits.”

The support for work requirements in welfare is consistent across party lines, with 87 percent of Democrats and 94 percent of Republicans agreeing with this statement.

Not only do work requirements for able-bodied adults enjoy support from a vast majority of the public—their implementation has also proven effective on the state level.

For example, in July 2014, Maine announced that it would no longer grant waivers from the work requirements for able-bodied adults without dependent children.

In order to receive benefits, they would thus have to work, participate in a work program for 20 hours per week, or do community service for about six hours per week.

It is important to note that this policy did not arbitrarily cut food stamp recipients from the program rolls. Able-bodied adults without dependent children in Maine were removed from the rolls only if they refused to participate in modest activities.

In fact, most of these individuals in Maine chose to leave the program rather than participate in training or community service, despite the strong outreach efforts of government caseworkers. This indicates that these individuals had other means of supporting themselves.

As a result of the new policy, the Maine caseload for able-bodied adults without dependent children dropped 80 percent in just a few months, falling from 13,332 in December 2014 to 2,678 recipients in March 2015.

The Supplemental Nutrition Assistance Program Reform Act of 2017 establishes a federal work requirement for this same category of individuals, similar to the one established in Maine.

If enacted, this policy would save taxpayers around $90 billion over the next 10 years, or roughly 13 percent of the program’s 2018-2027 projected spending.

Federal welfare policy should not simply deny assistance to those in need, nor should it discourage anti-poverty mechanisms such as work.

H.R. 2996 is modeled on Maine’s successful reforms and would continue providing assistance to able-bodied adults without dependent children who work or engage in “work activation”—including supervised job searching, training, or community service—in exchange for their food stamp benefits.

This bill extends the successful principles of the mid-1990s welfare reform to additional welfare programs. In the long term, this reform would help reduce poverty and government dependency while saving taxpayers billions of dollars over the next decade.