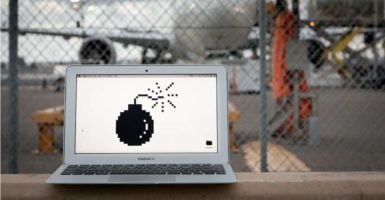 An airline ban on electronics—such as laptops—would be costly. Other measures could more effectively provide safety for passengers. (Photo: picture alliance/ Frank Duenzl/Newscom)

The Department of Homeland Security announced on March 21 that all personal electronic devices larger than a cellphone—such as a laptop—were banned from the cabin of direct flights to the U.S. from 10 Middle Eastern and African airports.

Over three months later, it created an alternative to both expand and replace the ban: Large electronics would be banned on all flights to the U.S. unless airports met more stringent security measures, including increased screening measures, enhanced security protocols surrounding passengers and airports, and expanded canine screening.

The 10 original airports on the list were in Jordan, Egypt, Turkey, Saudi Arabia, Kuwait, Morocco, Qatar, and the United Arab Emirates.

However, since Sunday, three airports have been removed from the list after meeting the new security requirements. The Emirates, Turkish, and Etihad airlines fly out from Dubai, Istanbul, and Abu Dhabi, respectively.

Moreover, Saudi Arabia expects its flights from Jiddah and Riyadh to be exempted from the electronics ban list no later than July 19.

While these five airports are meeting or expect to meet the new security requirements, airports and airlines across the rest of the world only have a couple of weeks before the first mandatory requirements come into effect. Those not complying could see the electronics ban extended to their airlines.

When DHS first introduced the laptop ban, it was obvious that the policy would have a noticeable impact on travel around the world. As such, it was critical for DHS to consider the cost-benefit risk analysis surrounding the issue.

Policies that improve our security slightly but at extraordinary cost should not be adopted, and although additional bans may provide some security, the cost of implementation and its effect on trade and travel render them imprudent.

Because such an electronics ban is so costly, it was critical for the department to seek out alternatives to ensure long-term American security.

The U.S. could encourage the deployment of additional bomb-detection capabilities, like computed tomography or bomb-sniffing dogs at airports abroad. The U.S. could also require more scrutiny at security checkpoints for individuals with electronics.

Currently, DHS is requiring such policies as part of its new security measures.

DHS is to be commended for allowing airports to implement stronger security policies as an alternative to the laptop ban.

However, the department is also expanding the costly, full electronics ban if airports do not meet its new requirements. With the Abu Dhabi, Dubai, and Istanbul airports all meeting the new guidelines, there is reason to be optimistic that other airports across the globe will be able to quickly meet these requirements.

If not, however, there will be significant disruptions and costs as a result. Hopefully, these new policies will be easily implemented, thus avoiding the electronics ban and improving security at the same time.