Why President Trump’s Europe Trip Was a Success 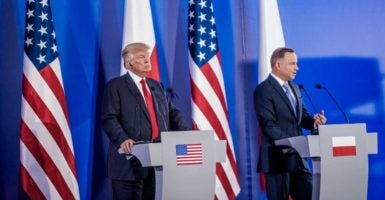 President Donald Trump returned from Europe on Saturday, and can look back on a robust trip across the Atlantic.

His speech in Warsaw’s Krasinski Square on Thursday was by far the best he has given so far on the international stage. Trump’s Warsaw address, which was a powerful defense of Western civilization and the values that underpin it, was one of the most significant foreign policy speeches delivered by a U.S. leader since the days of Ronald Reagan.

The speech was extremely well received by Trump’s Polish hosts, who are growing as a force within Europe. It spoke volumes that the White House chose to make Warsaw the venue for the president’s only speech in his second European tour. It is the capital city of a resurgent Eastern European nation that is increasingly challenging the dominance of Berlin and Paris within the European Union.

Like Britain (which will exit the EU in 2019), Poland is a standard bearer for the defense of national sovereignty in Europe.

Poland is also on the front line of the NATO alliance, and Trump reiterated in his remarks America’s firm commitment to Article 5 of the Washington Treaty, enshrining the principle of collective security.

He also used his speech in Warsaw to condemn the reckless foreign policy and dangerous aggression of the Putin regime, urging Russia “to cease its destabilizing activities in Ukraine and elsewhere, and its support for hostile regimes—including Syria and Iran—and to instead join the community of responsible nations.”

At the G-20 summit in Hamburg following the Polish visit, Trump met with Russian President Vladimir Putin in a highly anticipated matchup between the two leaders.

There were not, as the Russians were hoping for, any concessions from the U.S. regarding the lifting of economic sanctions against Moscow over its illegal occupation of Crimea and Moscow’s proxy war in eastern Ukraine.

Significantly, existing sanctions against Russia were strengthened by the U.S. Treasury in the lead up to the G-20. In their meeting, Trump pressed his Russian counterpart several times over the issue of Russian interference in the U.S. presidential election, according to a readout given to journalists by Secretary of State Rex Tillerson.

Elsewhere at the summit, Trump stood firm in rejection of the Paris climate accord, and made clear his administration’s opposition to an agreement that would be hugely costly to the U.S. economy, and would undermine American sovereignty.

At the end of the summit, Trump met with British Prime Minister Theresa May, underscoring his firm support for Brexit, and pledging to advance a U.S.-U.K. free trade deal “which will be a very, very big deal, a very powerful deal, great for both countries and I think we will have that done very, very quickly.”

Trump made clear that the special relationship remains at the very heart of U.S. strategic thinking, and declared that “there is no country that could possibly be closer than our countries … Prime Minister May and I have developed a very special relationship and I think trade will be a very big factor between our two countries.”

Throughout the president’s second visit to Europe, several key themes were advanced.

A robust defense of Western civilization, NATO, and the transatlantic alliance; a determination to stand up and defeat those forces that threaten the West; a firm belief in the principles of national sovereignty and self-determination; and a commitment to key bilateral partnerships that advance U.S. interests and strengthen the free world.

Trump’s trip should be viewed as a success. It was a firm rejection of the disastrous “leading from behind” approach of his predecessor in the Oval Office, and was the clearest sign yet that the president is settling in to his role as leader of the free world.