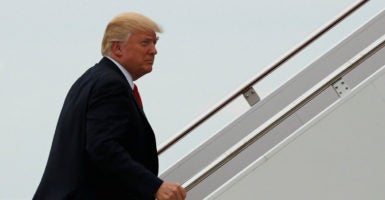 Europe is readying for yet another visit from President Donald Trump, the second in this young presidency.

No doubt a media circus will follow him wherever he goes, and Trump will have quite an agenda.

This time, Trump will be making a number of stops: first at the Warsaw summit on July 5, where Poland will be making the case for a North-South commerce and energy axis in Europe, stretching from Poland to Croatia; then at the two-day G-20 developing countries summit in Hamburg, Germany, on July 7, where he’ll be meeting in person with Russian President Vladimir Putin for the first time.

Trump will then return to Europe for the French Bastille Day celebration on July 14—Trump caught the French by surprise by accepting a half-serious invitation from the newly elected French President Emmanuel Macron.

Beyond grabbing the major headlines in Europe, however, Trump needs to start thinking seriously about the messaging and ideas that inform his presidency, and how those ideas are received abroad.

In the new issue of The National Interest, James Jay Carafano, vice president for foreign policy and defense studies at The Heritage Foundation, offers a way forward for U.S.-European relations—an uneasy, but constructive truce between different governing ideas.

As the West’s victory over the communist Soviet Union demonstrated, ideas are immensely important, and that is as true today as it was then. Unfortunately, the Trump State Department has yet to make much progress in filling the jobs that will help expound Trump’s foreign policy vision.

From the position of undersecretary for public diplomacy to the director of the global engagement center at State, to the CEO of the Broadcasting Board of Governors, key jobs remain filled by acting directors who have no presidential mandate to set the course.

That course is what Carafano deals with in his article, “The Fight over Nationalism Is about to Get Messy.”

Trump’s vision of “America first” in Europe frequently gets equated with European ultra-nationalism, which can have an ugly, xenophobic face.

With the rise of European immigrant and refugee populations from the Middle East and the failure of European governments to meet their citizens’ concerns, this kind of European nationalism has been on the rise. It clashes inherently with the vision of European federalists, who are trying to build a continent without internal borders and with a central government in Brussels.

Nationalism in the United States is different, though.

Trump voters in the United States know a different kind of nationalism, one that is constructive, focused on domestic job creation, energy independence, building strong communities, and protecting American borders and interests.

This vision is not in itself racist or xenophobic—it in fact acknowledged the role of legal immigrants in building the American dream.

Trump needs to care about the war of words. The peace, prosperity and stability of Europe are of vital importance to the United States … Euro-federalists also would be wise to stop trashing Trump. They need all the allies they can get. Instead, they should be optimistic, constructive and engage the new U.S. administration. It will be far better for them to try to build better outcomes with the United States than to commit to an inflexible vision of European integration or nothing.

Trump needs to engage all Europeans in order to counteract the destructive forces at work on their continent. Those forces are only fueled by Russian propaganda and disinformation aimed at tearing Europe apart, and sowing confusion and division within the United States.

Note: This article has been updated to correct the dates of President Trump’s visit to Europe.