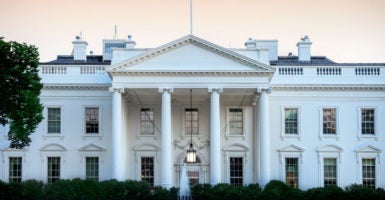 An analysis of White House salary data reveals that President Donald Trump’s administration is spending $5 million less of taxpayer money on his staff than his predecessor.

Trump employs 377 people at the White House, with a total of $35.8 million, while former President Barack Obama paid $40.9 million for 476 employees in 2015, according to data analyzed by Open the Books.

Another key difference between the Obama and Trump White House is the first lady’s staff. Michelle Obama retained 24 staffers in the first year of the Obama White House. Melania Trump currently employs four—a chief of staff who is also listed as adviser to the president, a deputy chief of staff, a communications director, and a scheduler.

“Projected four-year savings on the White House payroll could top $22 million,” Adam Andrzejewski, CEO of Open the Books, writes for Forbes. Those projected savings include Trump’s promise to accept $1 in salary and give the remainder back to the U.S. Treasury.

Obama had the same number of top advisers at this stage of his presidency in 2009, but he also appointed many “czars” to oversee special initiatives with a particular focus on recovery efforts after the 2008 financial crisis. Trump has not continued that

While $22 million in savings is a tiny amount compared to the nearly $20 trillion national debt or the $3.9 trillion federal budget, “it could be a leading indicator of Trump’s commitment to cut waste, fraud and taxpayer abuse,” Andrzejewski said.