DC Residents Now Can Drive Under ‘X’ as Gender Identity 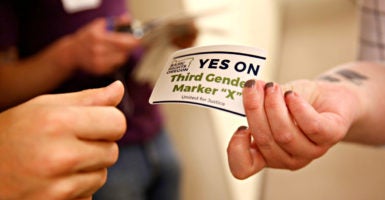 Stickers promoting a nonbinary "X" designation as a third gender choice for driver's licenses and other identification cards are handed out during a May 10 hearing in Portland, Oregon. (Photo: Terray Sylvester /Reuters/Newscom)

Residents of the nation’s capital now may choose the designation “X” on their driver’s license rather than “male” or “female” if it better fits what they consider their gender identity.

The District of Columbia became the first jurisdiction in America to allow this third option Tuesday as the change went into effect at the city’s Department of Motor Vehicles.

The 1st person in America to have an X instead of M/f on their drivers license walks out of the @dcdmv. They do not identify as man or woman pic.twitter.com/yooUr3oq7W

A similar measure in Oregon is set to take effect July 3. California could soon follow.

The District’s DMV worked with an organization called the National Center for Transgender Equality to implement the “nonbinary” option, which appears as an “X” on driver’s licenses rather than the traditional “M” for male and “F” for female.

D.C. Council member Brianne Nadeau, D-Ward 1, also introduced a bill to cement the change in city law. The bill has five co-sponsors on the 13-member council.

Called the Nonbinary Identification Cards Amendment Act, the legislation provides that the DMV “shall permit applicants for a license, permit, or identification card issued pursuant to this act to designate their gender as ‘non-binary’ in lieu of ‘male’ or ‘female.’”

Oregon began the process to allow a third option after a court decision last year in Multnomah County. Judge Amy Holmes Hehn ruled in favor of resident Jamie Shupe’s request to be legally recognized as a third gender.

This 17-year-old could be the first teen with "nonbinary" on their driver's license https://t.co/gPxXP0DHr8 pic.twitter.com/rJndiJICBk

The California Senate passed legislation May 31 that would allow residents to choose to list themselves as “nonbinary” rather than male or female on driver’s licenses, birth certificates, and alternative state-issued identity cards.

“While we are sympathetic to the difficulties facing those experiencing gender dysphoria, we believe government documents need to reflect biological facts for identification and medical purposes,” Jonathan Keller, CEO of the conservative policy group California Family Council, told The Sacramento Bee.

The state Senate voted 26-12 to pass the bill, with 26 Democrats in favor and 12 Republicans opposed. One Democrat and one Republican did not vote.

The bill will become California law if passed by the Assembly, the lower chamber,  and signed by Gov. Jerry Brown, a Democrat. The Assembly referred the bill to a committee June 22 for review.