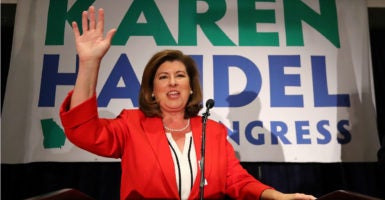 Handel, 55, a businesswoman who was Georgia’s secretary of state, had 134,595 votes or 52 percent with all precincts reporting.

Ossoff, 30, a documentary filmmaker and former congressional aide who does not live in the House district, had 124,893 votes or 48 percent.

Some polls had Ossoff up by 7 percentage points or more, but the race appeared to go down to the wire in the closing hours.

“It was going to require all hands on deck, which is exactly what we had,” Handel told a jubilant victory party at 10:39 p.m., thanking President Donald Trump for his support.

Five months into Trump’s presidency, pundits cast the race in Georgia’s 6th Congressional District as a referendum on his administration and a bellwether for the balance of power in Congress nearly a year and a half before the midterm elections.

Trump defeated Democrat Hillary Clinton in the district by under 2 percentage points in November even though the previous incumbent, Republican Tom Price, won re-election to the seat with about 60 percent of the vote.

The race between Ossoff and Handel is the most expensive House race ever, CBS News reported, with fundraising exceeding $50 million.

By the end of May, Handel and Ossoff had spent $3.2 million and $22.5 million, respectively, according to campaign finance reports filed with the Federal Election Commission, ABC News reported. Handel also will make history as the first woman to be elected to Congress from Georgia as a Republican. Six women have represented the state as Democrats.

“This is a huge win for conservatives,” Cole Muzio, president of the Family Policy Alliance of Georgia, told The Daily Signal in an email. “A record-setting fundraising haul, busloads of out-of-state volunteers, and national unity around Jon Ossoff could not convince Georgians to vote against their own interests.”

The seat opened in February when the Senate confirmed Price as Trump’s secretary of the Department of Health and Human Services.

Handel beat 10 other Republican candidates in the April 18 “jungle primary” with 20 percent of the vote, setting up the Tuesday runoff with top vote-getter Ossoff, who rolled up 48 percent as one of five Democrats in the race.

She thanked all of them, as well as House Majority Whip Steve Scalise, R-La., hospitalized in serious condition six days after being shot by a man with a rifle and handgun who targeted Republican lawmakers at a baseball practice just outside Washington.

Congratulations to Karen Handel on her big win in Georgia 6th. Fantastic job, we are all very proud of you!

“This is not the outcome any of us had hoped for, but this is the beginning of something much bigger than us,” Ossoff said in his concession speech, adding, “The fight goes on.”

Republicans have held the seat for nearly 40 years, since Gingrich, later speaker of the House, first won it in 1978. But Democrats predicted that suburban Republicans would turn on Trump and his conservative allies.

Handel campaigned on repealing and replacing Obamacare, supporting the pro-life cause, and achieving “a simpler, fairer, tax code that promotes economic growth” as well as “securing our borders.”

Another special election Tuesday actually turned out to be closer as South Carolina voters filled the House seat previously held by Office of Management and Budget Director Mick Mulvaney, who Trump nominated to the post in December.

Ralph Norman ran a fantastic race to win in the Great State of South Carolina's 5th District. We are all honored by your success tonight!

Norman, 64, previously was president of the York County Board of Realtors and served in South Carolina’s House of Representatives for 11 years.  Parnell, 66, was a tax attorney for the U.S. Department of Justice and for the U.S. House Ways and Means Committee under Democrats’ leadership.

In Georgia, Handel was deputy chief of staff to Gov. Sonny Perdue and chairman of the Fulton County Board of Supervisors before running successfully for secretary of state and serving from 2007 to 2010.

She came to the attention of conservatives across the country in 2012, when she quit as senior vice president of public policy at Susan G. Komen for the Cure. She did so after the breast cancer charity reversed its decision to stop funding Planned Parenthood, a reversal she opposed.

“In a district that Donald Trump won by 1 [percentage] point, Karen Handel managed a strong victory and pushed back against the onslaught of Pelosi-Planned Parenthood money that poured into the district,” Muzio of the Family Policy Alliance told The Daily Signal, referring to House Minority Leader Nancy Pelosi of California. He added:

After a disciplined campaign in the first round, Ossoff showed his true colors in the runoff when he attacked Karen Handel for opposing Planned Parenthood funding. There will be a number of narratives that come from this result, and the significance of this runoff will almost certainly be overstated. But, make no mistake about it, this was a win for conservatives.

“Democrats literally bet the House on a win here, and this defeat will certainly leave their base utterly demoralized ahead of 2018,” Muzio said.

Ossoff was a national security staffer and aide to Rep. Hank Johnson, D-Ga., for five years. He grew up in the area, but does not currently reside in the 6th District, as The Washington Post reported.

During an interview Tuesday on MSNBC, Ossoff told Stephanie Ruhle that his living outside the district did not matter to voters, and that he had not considered moving.

“Well, if voters were raising that as a serious concern, Steph, maybe I would,” Ossoff said, adding:

Handel was born in Washington, D.C., and grew up in the Maryland suburb of Upper Marlboro.

Trump raised some eyebrows with this effusive tweet Tuesday morning, which some pundits predicted could hurt Handel:

KAREN HANDEL FOR CONGRESS. She will fight for lower taxes, great healthcare strong security-a hard worker who will never give up! VOTE TODAY

.@KarenHandel is a great candidate, and #TeamScalise is pulling for her! #GA06

Dan Holler, spokesman for Heritage Action for America, the lobbying affiliate of The Heritage Foundation, told The Daily Signal in an email that Handel’s win is good news for the Republican Party.

“Despite tens of millions of dollars flowing into the race—a level of funding that cannot be replicated in every midterm race—Republicans managed to hold on,” Holler said, adding:

It would be a mistake to view this as a sign of confidence in the national party, though. The slow legislative pace and the absence of a bold governing agenda is dampening Republican enthusiasm, and absent conservative policy victories, that may continue heading into 2018.

Benita Dodd, vice president of the Georgia Public Policy Foundation, a nonpartisan research organization, told The Daily Signal in an email that the state’s 6th District race was largely civil despite what many partisans saw as high stakes.

“The most encouraging part of the 6th District runoff, the most expensive congressional election in U.S. history, is that it managed to stay mostly civil in an increasingly hostile political arena,” Dodd said, adding:

That said, Jon Ossoff’s campaign waged a sophisticated, successful ‘Wag the Dog’ operation: It began with a 30-year-old unknown, a Democrat who had never held office and doesn’t even live in the 6th District. With funding largely from campaign donations outside the state, he was portrayed as a palatable and viable challenger to Karen Handel, a well-known, respected, and successful GOP veteran and resident of the reliably Republican district.

The spending points to what’s to come in the midterms and beyond, she said:

This costly effort is portentous of the direction of future campaigns. It’s ominous, given the attention span of many voters in a 140-characters-or-less era, that campaign rhetoric can be so easily manipulated. As for the overwhelming cost, it’s an unpleasant downside that early voting ratchets up the cost of political campaigns.

Ken McIntyre contributed to this report, which was updated as precincts reported.