Subsidizing Nuclear Is No Strategy for Long-Term Success 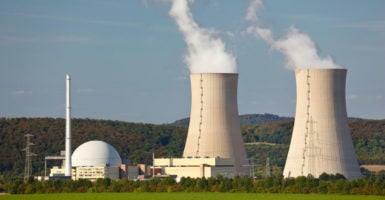 With yet another nuclear power plant joining the ranks of those closing ahead of schedule, it’s clear that something is amiss in the nuclear power industry.

That “something” is the accumulation of federal policies that stifle innovation and efficiency in the industry and simultaneously subsidize it to keep it alive on life support.

Members of the House Ways and Means Committee reviewed a bill (H.R. 1551) that basically continues the status quo. That is not acceptable.

Despite the many energy and environmental benefits of nuclear power, the industry has fallen on tough times. Low natural gas prices have put pressure on the nuclear industry, though this has happened before.

Subsidies at the state and federal levels have prioritized renewable energy technology rather than qualities like reliability of electricity supply, where nuclear excels. Such subsidies have essentially created an artificial market for renewables and have distorted electricity markets.

Nuclear energy is also perhaps the most regulated commercial industry in the U.S. The American Action Forum calculated that paperwork compliance alone cost $4.2 million per year per power plant.

The list could go on to include an unclear, expensive regulatory process for new nuclear energy technology on the front end, and an equally expensive and vague decommissioning and waste management process on the back end.

It’s become apparent that the only four candidates for the credits (the Vogtle plants in Georgia and VC Summer plants in South Carolina) will not finish construction in time, having both faced cost and schedule overruns—hence the panic to extend the tax credits.

Rather than setting a deadline, the bill is open-ended and would keep subsidies available until expended. It would also make them transferrable to other parties contributing to their construction, including federal, state, and local government entities.

That is nothing more than a Band-Aid.

The solution for nuclear energy’s woes is not to subsidize its existence. Instead of bringing about a nuclear renaissance as originally hoped, subsidies have tied nuclear investment and innovation to political whims rather than smart business decisions, common sense, and good ideas.

Politicians may see it as a badge for a good deed done, but nuclear subsidies also dull the effects of years of bad policy without solving the root problems.

While subsidy recipients might skate by on the taxpayer’s dime, the original problems persist under the surface for the future industry to deal with.

To help the nuclear industry, politicians must do the hard work of getting to the roots of its problems—eliminating all energy subsidies, eliminating policies and regulations that favor certain energy technologies and resources over others, tackling regulations that put undue expense on commercial nuclear plants for no meaningful health or safety benefits, streamlining decommissioning, and taking nuclear waste management seriously.

In doing so, Congress would unleash the nuclear power industry to compete fairly on a level playing field, and show leadership to states that have done their own part to distort energy markets.

It shouldn’t be the project of politicians to make an energy resource succeed, whether that is nuclear power, renewables, or traditional resources like oil, natural gas, and coal.

Energy technologies should succeed or fail on their own merits, where the arbiters of success are in the marketplace, not the Capitol.