The Shameful Response of the Left to Attempted GOP Massacre 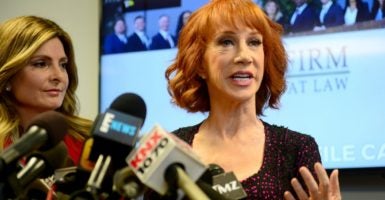 After coming under fire for posing with what looked like President Trump's bloody head, comedian Kathy Griffin said the Trump family was "bullying" her. (Photo: Los Angeles Daily News/ZumaPress/Newscom)

I’d thought liberals would at least react with sympathy and sorrow that innocent people had been targeted by former Bernie Sanders volunteer James Hodgkinson, the man police say was the shooter, and allow some time to pass before switching to gun control.

And maybe there even would be some honest self-reflection on whether there had been too much levity about comedian Kathy Griffin’s decision to pose with a red-stained replica of Trump’s head, ISIS-style, or a New York theater director’s choice to portray a Donald Trump look-alike’s assassination in “Julius Caesar.”

Now, of course, neither Griffin or “Julius Caesar” director Oskar Eustis is at all responsible for the shooter’s decisions—but, just as I would hope no conservative would have done such things to President Barack Obama, it’s reasonable to ask the left to behave better, to not forget that Donald Trump, too, is a person. (And yes, it was inappropriate when a 2012 version of “Julius Caesar” starred an actor resembling Obama.)

And of course some, perhaps even most, on the left have been acting in a respectful way.

But there’s been some glaring exceptions.

The New York Times, rightly, is getting pilloried for its editorial, published Wednesday, that insinuated Sarah Palin’s target map was to blame for the shooting of Gabby Giffords. Here’s the language from the original editorial (via National Review):

Was this attack evidence of how vicious American politics has become? Probably. In 2011, when Jared Lee Loughner opened fire in a supermarket parking lot, grievously wounding Representative Gabby Giffords and killing six people, including a 9-year-old girl, the link to political incitement was clear. Before the shooting, Sarah Palin’s political action committee circulated a map of targeted electoral districts that put Ms. Giffords and 19 other Democrats under stylized cross hairs.

The New York Times has since corrected the piece, noting: “An earlier version of this editorial incorrectly stated that a link existed between political incitement and the 2011 shooting of Representative Gabby Giffords. In fact, no such link was established.” Indeed.

National Review’s David French dismantled the argument, writing: “In its zeal to create moral equivalencies and maintain a particular narrative about the past, the Times flat-out lied. There is simply no ‘link to political incitement’ in Loughner’s murderous acts. The man was a paranoid schizophrenic who first got angry at Gabby Giffords years before Palin published her map.”

even way back in Jan 2011 we knew that Loughlin’s obsession began 3 years before the Palin map.https://t.co/9nJccuIQnb

You know what wasn’t mentioned in that Times editorial, which noted their grief in 2011 at “vicious American politics”? Kathy Griffin wasn’t mentioned nor was the “Julius Caesar” play. Oh, sure, the Times offered a pablum take on civility, writing:

Conservatives and right-wing media were quick on Wednesday to demand forceful condemnation of hate speech and crimes by anti-Trump liberals. They’re right. Liberals should of course be held to the same standard of decency that they ask of the right.

But without naming names or calling out any specific instances, that’s a pretty toothless take.

And when I went to The Slot, an offshoot of my favorite liberal site Jezebel, I found this comment on the article about the Scalise shooting:

Yeah, f— these people. Scalise voted for the AHCA [American Health Care Act] and got a good chunk of change from insurance and pharmaceutical companies and health professionals. [Republican Rep. Mo] Brooks is a Freedom Caucus member, so he can go to hell, too. Worst thing they’ll have is a traumatic memory, but they have insurance that allows them to get PTSD treated. Scalise will probably have a scar on his hip. No sympathy for these people. (Note: Language edited for decency, in both screenshot and quote.)

And while many Democrat politicians seem to be acting with humanity (including the wonderful display of Democrat lawmakers praying at a Washington, D.C. baseball field when they heard about the shooting), some almost immediately brought up gun control after the attack at the baseball field in Alexandria, Virginia, just outside Washington.

A touching photo shows the Democrats' baseball team praying after learning their Republican colleagues had been shot https://t.co/OMi7GIscJq pic.twitter.com/zL1otAAnsC

Virginia Gov. Terry McAuliffe, a Democrat, had this to say Wednesday: “I think we need to do more to protect all of our citizens. I have long advocated — this is not what today is about — but there are too many guns on the street. We lose 93 million Americans a day to gun violence.”

McAuliffe, who clarified he meant 93 Americans a day after a reporter asked, said those words just a few hours after the shooting.

And Rep. Don Beyer, the Democrat who represents the district that includes the baseball field (and is, sadly, my House member), sent his constituents an email Wednesday afternoon that concluded with this sentiment: “I believe strongly that our nation should rethink its policies regarding gun violence, and I will have more for you soon on that issue.”

While I’m certainly aware of how fast the news cycle moves, could McAuliffe and Beyer maybe have held on to these hot takes, for oh, a whole 24 hours? After all, as of Wednesday night, Scalise was still in critical condition.

Let’s refresh: The shooter was a former Bernie Sanders volunteer, who lawmakers said started shooting after confirming those on the field were Republicans, and whose social media use shows a clear liberal tilt.

Rep. Mark Walker to @NBCNews: "Shaken but OK. Gunman was there to kill as many Republican members as possible." (via @AlexNBCNews) pic.twitter.com/bRiVgUb8x2

Hogkinson’s alleged violent actions are his own responsibility, and nobody else’s.

But would it have been so crazy for the left to have taken a step back and reflected on their overheated rhetoric of the past few months, their willingness to depict Republicans and conservatives as monsters who want to hurt minorities and LGBT Americans and take away everyone’s health care? (Instead of people who have different views on appropriate discrimination policies, religious freedom, and the best way to ensure everyone has access to health care, not just insurance.)

No. It wouldn’t have been crazy.

It would have been refreshing.

But unfortunately, that’s not the America we live in today.