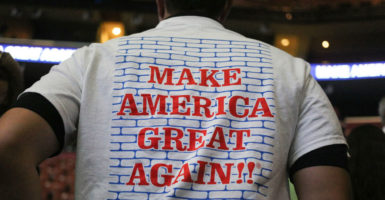 “If they don’t reissue [the yearbooks] and do something that’s reasonable then we can deal with lawyers and it’ll become a bigger deal,” says a student's father. (Photo: Isaac Zapata/newzulu/Newscom)

Multiple Wall Township High School students came forward to express outrage after they noticed their clothes had been altered in the photos, reported CNN Monday.

“TRUMP: Make America Great Again” was removed from junior Grant Berardo’s shirt while student Wyatt Dobrovich-Fago had the word “Trump” taken off his vest. Another student claims that a quote she included under her picture from President Donald Trump was taken out.

“He was disappointed. This was the first election he has been interested in,” Joseph Berardo, Grant’s father, told CNN. “I want the yearbooks to be reissued and I want a letter from the administration explaining why they are reissuing the yearbook.”

The superintendent for Wall Township Public Schools plans to investigate the censorship.

“There is nothing in our student dress code that would prevent a student from expressing his or her political views and support for a candidate for political office via appropriate clothing. Rather, I applaud students for becoming involved in politics and for participation in our democratic society,” Cheryl Dyer, the superintendent, said in a letter for parents.

Dyer pointed out that the school dress code only prohibits students from wearing clothes that promote drugs, alcohol, and weapons. None of the school administrators knew that the slogans would be erased, she added.

“We were not aware of it until the books were distributed, we do not condone it, and we working on a remedy to the issue. I cannot discuss personnel matters, but I take this very seriously and it will be addressed appropriately,” Dyer said to CNN.

A group of parents will sit down with school officials and the yearbook adviser to discuss next steps. Joseph Berardo says he will hire a lawyer if necessary.

“If they don’t reissue and do something that’s reasonable then we can deal with lawyers and it’ll become a bigger deal,” he said.