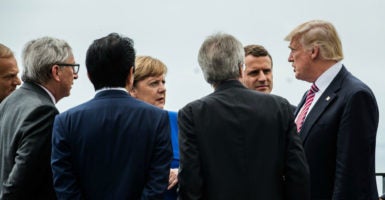 European leaders sought to pressure President Donald Trump to remain in the Paris climate accord during the G-7 summit, just one week before he officially withdrew. (Photo: Nicola Marfisi/Newscom) 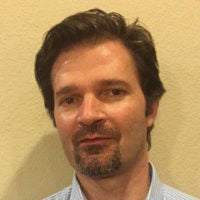 Christophe Barbier is a graduate student in international relations and diplomacy at Norwich University.

In his first four months at the White House, President Donald Trump has reiterated his commitment to pursuing “America first” policies on trade, economics, and foreign affairs.

That agenda became all the more clear on his recent trip overseas, in which he pressed Middle Eastern leaders to expel Islamist terror from their lands and chastised European leaders for failing to invest more in their own defense.

The thrust behind Trump’s agenda is a conviction that America must prioritize its own domestic and political interests.

While distinct in its own way, this nationalist approach also underlies much of the political sentiment currently animating European affairs, and Trump has shown strong support for it.

He also expressed optimism toward the prospect that Brexit could spur other European countries to question the validity and soundness of the European Union.

That sentiment clashes head-on with the liberal establishment in Europe, represented best by Jean-Claude Juncker, head of the European Union Commission. Last year, Juncker said that “borders are the worst invention ever made by politicians.”

Should Trump continue encouraging other nations to leave the EU, Juncker vowed that he would support efforts to encourage American states to secede from their union.

It comes as no surprise that Juncker pushed back on Trump for encouraging other EU nations to follow Britain’s lead and leave the EU. He threatened to promote independence for Ohio and Texas if Trump would not back off.

It is important to note that the creation of the EU more than 60 years ago was intended to produce greater economic integration and social cohesiveness, to make Europe a stronger player in trade policy and economic reforms.

Contrary to Juncker’s liberal vision, national borders are in fact essential to protecting both the safety and interests of the citizens of Europe.

For one, national governments prevent the kind of large-scale corruption and favoritism that has crept into the EU. As Sheffield went on to report in the Salon piece:

Juncker has also been attacked for his role in promoting corporate tax avoidance in Luxembourg, a tiny nation situated between France and Germany with fewer than 600,000 inhabitants. Some companies have allegedly incorporated in Luxembourg under a tax rate of less than 1 percent.

It seems that Juncker represents everything that Trump dislikes in leaders who represent the established liberal elite.

Trump and Juncker appear to be on a collision course. Trump is skeptical of the EU, and Juncker wants to defend and resolidify the principles that unite the EU.

This tension is only being intensified by the ongoing migrant crisis stemming from the Middle East and North Africa, which since 2015 has endangered the collective security of the EU and bolstered concerns over national identity.

The migrant crisis was in part encouraged by another EU leader, German Chancellor Angela Merkel, who opened the door to over a million refugees. Merkel bore heavy criticism for the crisis throughout 2016, leading to a regional election defeat for her party in September.

If Juncker and other European politicians press forward with a hard-line liberal agenda that makes borders less relevant and treats national identity as an obstacle to overcome, we can expect more Brexits to follow.

And Trump will be there to cheer them along.