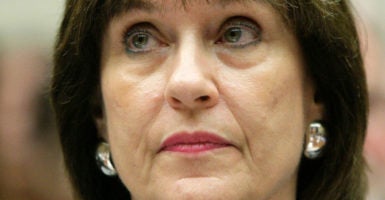 Tea party groups have yet to get the answers they seek about how Lois Lerner targeted their organizations in her IRS job. (Photo: Jonathan Ernst /Reuters/Newscom)

One tea party leader is still looking for answers from the IRS.

Lawyers for Lois Lerner, who resigned under fire as a division chief at the Internal Revenue Service, argue that more details of her reported targeting of tea party groups should not be revealed because her safety is in danger.

But Catherine Engelbrecht, founder of True the Vote, a nonpartisan organization dedicated to election integrity, said she wants to see such documentation released.

True the Vote was one of hundreds of conservative, nonprofit organizations whose applications for tax-exempt status were unfairly slowed or spiked by the IRS, and Engelbrecht said she intends to see the details come out.

What an honor meeting @TrueTheVote founder Catherine Engelbrecht at #MCRW. Thanks for all you do! pic.twitter.com/mMoSXH7Mej

Lerner and Holly Paz, another former IRS official involved in the scandal, recently filed papers in U.S. District Court in Cincinnati, seeking to keep secret certain IRS practices they discussed in depositions taken in a lawsuit filed by tea party groups against the government.

Judge Michael R. Barrett said Thursday that information from Lerner and Paz may be kept confidential until he hears their case, The Washington Times reported.

Lerner and Paz said in the court papers that making public details about how IRS workers in Cincinnati and Washington, D.C., “handled applications for tax-exempt status from tea party groups” could endanger their lives, USA Today reported.

Engelbrecht’s organization, which filed for tax-exempt status in 2010, was asked hundreds of questions by the IRS that she said “had nothing to do with nonprofit status.”

After the IRS requested copies of speeches she had given and groups she had interacted with, Engelbrecht said in the interview, she had had enough.

“We finally sued them and are still in court with the IRS over viewpoint discrimination,” Engelbrecht said.

“The only way you can ever heal a problem is if you understand the root source.

But lawyers for Paz and Lerner said their testimony in out-of-court depositions should be kept private.

“This documentation, as the court will see, makes very personal references and contains graphic, profane, and disturbing language that would lead to unnecessary intrusion and embarrassment if made public,” the lawyers said in a court brief.

The lawyers added that “public dissemination of their deposition testimony would put their lives in serious jeopardy.”

“That is a stunning admission, that what they did is so egregiously wrong and so criminal that people might be very angry with them over it,” John Eastman, professor of law at Chapman University, told The Daily Signal in an interview. “That’s exactly why it’s important that this see that light of day.”

“The court should summarily dismiss this claim and order their immediate appearance,” von Spakovsky said of Lerner and Paz in an email to The Daily Signal.

The Daily Signal sought comment from the IRS, but did not receive a response.

Tom Fitton, president of Judicial Watch, a government watchdog organization, said he isn’t convinced that disclosure of the specific actions by IRS employees would be life threatening.

“It’s hard to know what the actual issues are without being able to review the briefs, so I think that is an important caveat,” Fitton told The Daily Signal in an interview, adding:

The principle is to err on the side of public disclosure, and certainly a portion of the transcripts that were under official duties and responsibilities, in my view, would be in the public interest to have available.

Any evidence filed should be made public, with sensitive personal information removed, Fitton said:

Well, the key is, this is a public court proceeding and these are senior government officials, so without discounting the concerns about personal safety I think any of those concerns can be mitigated to a sufficient extent so as to allow dissemination of material about what they were up to at the IRS.

The situation could play out several ways, Eastman said.

“There’s a motion for a protective order pending, and they’re arguing that the potential harm to Lois Lerner and Holly Paz exceeds anything we would learn in the discovery [of the IRS actions in question],” the law professor said.

Eastman said the threshold for issuing a protective order  is extremely high, but that a judge may decide, after depositions are taken, to make public only some parts.

Lerner and Paz’s circumstances, von Spakovsky said, are similar to many situations public figures face and shouldn’t be treated differently.

“All current and former public officials in Washington get nasty emails and offensive letters and social media tweets—including me,” Spakovsky said, adding:

If that were the criteria for excusing someone from testifying about their misbehavior while in office, then they would have the ready-made equivalent of a get-out-of-jail-free card—or in this case, getting out of testifying as they are legally obligated to do.